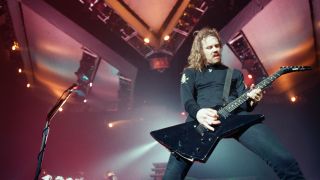 Bob Rock recently sat down with Gibson TV for the company’s Icon series, and among other topics the producer went in depth on his work with Metallica over the years, in particular on their landmark 1991 self-titled album.

Regarding how he introduced the band to the concept of using D-standard tuning on their electric guitars and bass during that time, he said, "On my notepad I'd write the key and the tempo, the chart and the arrangement. And maybe six songs in, I noticed that every song was in E.

“So they de-tuned down to D, and the next song was Sad But True [head here for a detailed look at how to get Hetfield’s monstrous rhythm guitar tone on the song], and they just played it once and it was just, like, 'Holy fuck.'

“They started to like me a little bit on that day. Just a little bit. I think they started having lunch with me. You know, we just kind of talked about it, and they knew they wanted to change things up."

While Rock may have been prescient when it came to the idea of having Metallica tune down, he also revealed he had something of a blind spot regarding the album’s breakout smash single, Enter Sandman.

"To me it was like, I didn’t get it yet. Because all the lyrics weren’t there. I was thinking Holier Than Thou, only because that kind of energy was up-tempo and that kind of works for me. What do I know?

“It ended up being Sandman, obviously a good choice.”

For more info on Sad But True's guitar secrets, check out our guide to the gear Hetfield used to record those monster tones.