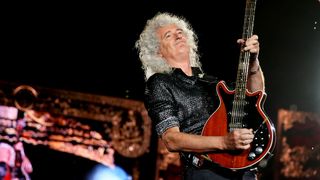 Brian May has been making headlines throughout the COVID-19 quarantine period, first for teaching Bohemian Rhapsody and inspiring countless collaborative jams, then for tearing his buttocks in a freak gardening accident. And now the Queen guitarist has admitted he recently suffered a heart attack, which left him “near death”.

In a new Instagram post, the Queen guitarist revealed that he continued to experience pain for a week after returning home from his gardening injury earlier this month.

Upon his return to hospital, an MRI scan revealed he had a severely compressed sciatic nerve - something May contributes to “50 years of running around with a guitar strap over my left shoulder holding a heavy guitar… But it probably was all worth it!”

The guitar hero also discovered that a 40-minute period of chest pain and tightness during his gardening injury had, in fact, been a small heart attack. He has since had stents implanted to restore the flow of blood to blocked arteries.

“I’m incredibly grateful that I now have a life to lead again,” said May. “I was actually very near death because of this, but the pain that I had was from something completely different.”

Fortunately, May is still in good spirits - even joking about one particularly pertinent Queen album title…

“Sheer Heart Attack, eh?” he said. “Well, I think I always worried a little bit about that album title. I wondered if it might upset some people who had actually had heart attacks. I’m actually quite relieved now that I’m in that club - and I don’t find it upsetting at all!”