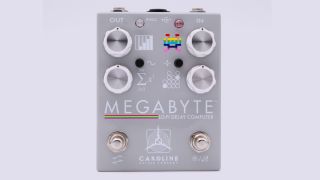 Said company founder and chief designer Philippe Herndon, “People have asked us for years to make a tap-tempo delay. I had some curious ideas how we might go about that, but our customers repeatedly confronted me and said they wanted a tap-tempo version of our popular Kilobyte delay.

“So with our collaborators, John Snyder at Electronic Audio Experiments and Scott McCombs at McCohms Labs, we split the difference.”

Boasting “two old school lo-fi digital chips,” the Megabyte offers up to 1,200 ms of delay time between echoes and a +21db preamp that allows repeats to be driven into clipping.

A “Havoc” function provides runaway repeats when the user holds down the tap button, while a modulation control detunes the repeats.

Other features include switchable trails and true bypass modes, a dry-kill control and a maximum headroom option.

Like Caroline’s Hawaiian Pizza Fuzzdrive, the Megabyte was originally offered in small-batch release for charity, with a limited number of advance sales benefitting Sexual Trauma Services of the Midlands.

The Megabyte is available for $249.99. For more information, head to Caroline Guitar Company.