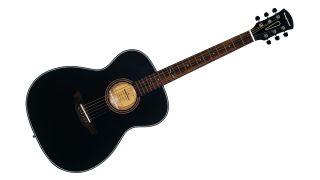 Just in time for Halloween, Orangewood has released the Oliver Black, a limited-edition version of their Oliver acoustic guitar.

The new model boasts the same grand concert body and solid spruce top as the Oliver, only now with a “spooky” black matte finish.

Other features on the Oliver Black include layered mahogany back and sides, a mahogany neck and an ovangkol fingerboard and bridge.

The Oliver Black will be available beginning, 'natch, on October 31. For more information, head to Orangewood Guitars.

It's not the first limited-edition Halloween model we've seen this year, either, as it follows Gibson's new Bats in Flight Les Paul Custom, which was also announced this week.