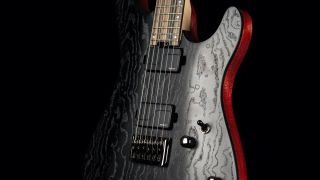 Cort has introduced the KX500 Etched, which the company is touting as the new flagship of its KX Series of electric guitars.

There’s also a five-piece maple and purpleheart neck and a Macassar ebony fingerboard with 24 frets and raindrop inlays.

Pickups are a pair of Fishman Fluence Modern humbuckers, with push/pull volume (Voices 1 and 2) and tone (coil split) knobs and a three-way switch.

Other features include a hardtail bridge, staggered locking tuners and black nickel hardware.

You can watch Ryan "Fluff" Bruce put the model through its paces in the demo video above.