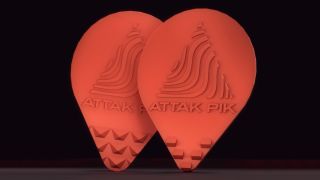 This has been a good year for radical guitar pick designs, and now we have the newest entry on the market, Acoustik Attak’s Attak Piks.

The new plectrums, which are designed to achieve “the sonic result of multiple, rather than single strikes on guitar or bass strings,” utilize a customized injection molding process for a patented design featuring raised ridges, diamonds and other patterns on both sides of the lower tip attack zones.

The result, according to Acoustik, is “enhanced sound waves, regardless of an electric or acoustic player's choice of instrument or strings.”

The series is being launched with two models – the Ambush and the Attak.

The namesake Attak pick, meanwhile, features three rows of pyramid-shaped ridges on its top and bottom “for clarity and less string noise, especially within mids and high mids.” Acoustik is aiming the Attak design at lead guitarists.

The Ambush and Attak picks are offered in packs of three for $9.99 each or packs of four for $12.99 each. For more information or to purchase, head to Attak Pik.