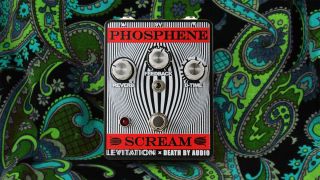 In celebration of Austin’s Levitation festival, Death By Audio has teamed up with Austin psych-rock band the Black Angels for a new limited-edition delay and reverb effect pedal, the Phosphene Scream.

A collaboration between the Black Angels’ Alex Maas and Christian Bland and DBA’s Oliver Ackermann, the new pedal is designed to pay tribute to Austin’s psychedelic rock legacy while also, according to Death By Audio, “being a reverb and delay pedal so totally awesome that it’ll dig craters on the moon and give you real-life flashbacks.”

The Phosphene Scream boasts controls for reverb, feedback and d-time (delay time), as well as a three-way toggle switch to adjust the tonality of the decays for all of the effects.

Continuing the colorful language, the pedal offers “everything from shag-carpeted room sounds through realistic halls all the way to the kind of trippy never-ending delays that still cause flashbacks years later.”

Turn on and tune in exclusively at the Levitation webstore.