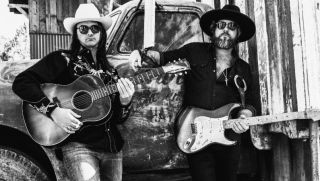 Devon Allman and Duane Betts, the sons, respectively, of Allman Brothers Band legends Gregg Allman and Dickey Betts, have joined together in a group, the Allman Betts Band. The outfit’s debut album is slated for release in March, 2019.

Additionally, the Allman Betts Band have announced the first dates of their 2019 world tour. The set lists for the upcoming shows will feature new music, songs from their respective solo projects and classic Allman Brothers and Gregg Allman tunes in honor of the 50th Anniversary of the Allman Brothers Band.

Tour dates for the Allman Betts Band are below. For more information and to purchase tickets, head over to AllmanBettsBand.com.

Additionally, the Devon Allman Project, with Duane Betts appearing as a special guest, are currently on the road. Information about those dates can be found here.