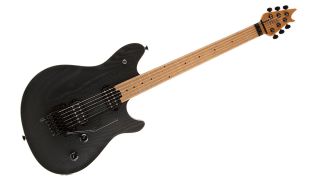 As well as launching the 5150III LBX-S head, EVH has unveiled a limited-edition version of the Wolfgang Special with a sassafras body.

There’s a quartersawn, graphite-reinforced, baked-maple neck bolted on, with a hand-rubbed satin urethane back finish, and 12”-16” compound radius baked maple fingerboard. There’s even a spoke wheel truss rod adjustor at the base of the neck.