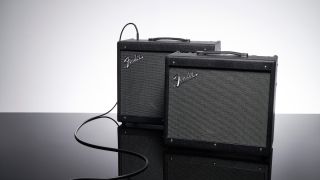 Fender has introduced the new Mustang GTX series of guitar amps, which the company is touting as its “most sophisticated connected modeling amps to date.”

The new range features the 50-watt GTX50 and 100-watt GTX100. Both combos boast new amp models, among them Fender classics like the Blues Jr and Vibro King, as well as other amplifiers including JC Clean and Silver Jubilee.

There’s also an elevated Celestion speaker and a host of new effects, including models of classic overdrive, fuzz, delay and pitch shift.

Additionally, the GTX100 comes with a performance-ready, seven-button footswitch, allowing for easier selection of presets and effects and operation of the amp's looper.

The third iteration of the free app is compatible with iOS, Android, Mac and PC and features 39 different amp types and 73 effect models, as well as a new look with hi-res 3D graphics, more signal path flexibility and real-time interactivity.

There’s also Bluetooth connectivity and the ability to manage custom presets and share them with other users on the app.

For more information, head to Fender.