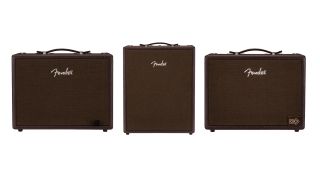 The new models are constructed with both performance and portability in mind; each amp weighs only 15lbs, 17lbs and 22lbs, respectively. The Acoustic Junior Go even includes a rechargeable battery for up to 5 hours of playing time at full volume, and up to 12 hours at a moderate volume.

Each amp is fitted with Bluetooth for wireless streaming of backing tracks, as well as an onboard 60-second looper.

All three amps offer eight studio-quality effects, and the SFX II - which packs an 8” speaker, 6” side-firing SFX speaker, and compression tweeter - is enhanced by Stereo Field Expansion, meaning the stereo dimension is felt anywhere in the room in which the amp is played.

Other features shared by the amps include two XLR outputs, a headphone output, an auxiliary input for external audio, a USB jack for audio recording and an optional four-button footswitch.

This isn't Fender's only new offering for acoustic players, either - this week, it also announced the Acoustic Preverb pedal, which combines a preamp and reverb in one stompbox.