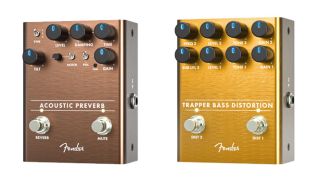 As well as its new Tread-Lite wah and expression/volume, Fender has announced two more pedals aimed at acoustic guitar and bass guitar players: the Acoustic Preverb and Trapper Bass Distortion.

Both stompboxes clock in at $169, and will be available from November 10.

They share the same lightweight, anodized aluminum enclosure and LED-backlit knobs of the rest of the Fender pedal range, but look to bring some fresh, smart sonic options to the line-up.

The Acoustic Preverb combines a “high-fidelity” preamp and three reverb settings that have been voiced especially for acoustic guitar, says Fender.

The pedal boasts one footswitch for reverb and another to mute the signal. A Notch filter and polarity switch are on hand to cut out feedback, while a Tilt knob is a shortcut to adjusting the overall EQ balance.

There’s no word on what those reverb types are, by the way, but based on Fender’s previous reverb pedal offerings, we’d be surprised if they’re anything but stellar.

The Trapper looks to do for bass what the superlative Pugilist did for guitar, delivering two separate distortion circuits, which can also be stacked.

Distortion channel 1 has an all-important crossover-blend circuit to retain the low frequencies, while distortion 2 acts as a ‘solo’ channel for extra gain.

Both pedals clock in at $169, and are available from November 10.