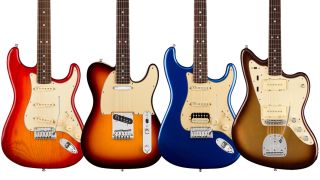 After a teaser campaign that set the guitar world alight, Fender has announced the American Ultra Series, which it’s touting as the “electric guitar design of the future”.

Chief among these is redesigned body contours, with comfort-driven back body curves and, crucially, a sculpted neck heel for increased upper-fret access.

On that note, the company has also seen fit to introduce a satin-finished ‘Modern D’ neck with 10-14” compound-radius fretboard, and “extremely” rolled edges, resulting in Fender’s fastest-playing necks yet.

The guitar giant has also re-voiced its Noiseless pickups to Ultra specs, available in Hot and Vintage configurations, while a treble-bleed circuit and “advanced wiring options” appear across the range via S-1 Switches.

There’s even an all-new, overwound Double Tap Humbucker on the HSS Strat, as well as Fender’s first-ever noiseless Jazzmaster pickups.

And, of course, it wouldn’t be a new Fender launch without new finishes, which include Cobra Blue, Mocha Burst, Texas Tea, Arctic Pearl, Aged Natural, Plasma Red Burst and Ultraburst.

There are some nifty upgrades over the existing Elite range here, putting Fender firmly in competition with more boutique takes on its designs, while the addition of a Jazzmaster to the range is a guaranteed winner for lovers of hot-rodded offsets.

The American Ultra Series starts at $1,899 - here’s the skinny on the extra features you can find on each model, as well as those all-important finishes...

The American Ultra Strat is most notable for its ability to add in the neck pickup to any position across the Ultra Noiseless Vintage single coils - a feature that recently appeared on the American Performer Strat.

As well as offering the most radical body contours yet seen on a Fender Tele, this model boasts Ultra Noiseless Vintage pickups, tweaked via a series-parallel S-1 Switch.

You can get it in Arctic Pearl, Ultraburst and Texas Tea with a rosewood fingerboard, or Ultraburst, Butterscotch Blonde, Mocha Burst, Plasma Red Burst and Cobra Blue with a maple fingerboard.

Finally, a contemporary-spec’d Jazzmaster! Not only does this Ultra offset pack Fender’s first-ever noiseless Jazzmaster pickups (Ultra Noiseless Vintage single coils, since you asked), but it also offers series/parallel and phase circuits, which make it one of the most versatile factory-built offsets we can recall.

There are tone controls for neck and bridge, plus a master volume, which houses the S-1 Switch for that series/parallel switching.

The slide switch, meanwhile, activates the phase circuit, with one roller pot for neck pickup volume and one for the bridge pickup.

Ultraburst and Mocha Burst are your finishes for rosewood fingerboard models, while maple enthusiasts get the option of Mocha Burst, Plasma Red Burst and Cobra Blue.

More for info on all of the new models, head over to Fender.