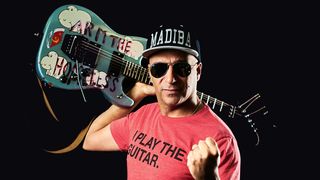 The launch of a production-line Tom Morello Soul Power Stratocaster was one of the biggest surprises of the gear year, but according to Fender CEO Andy Mooney, it’s the first of many signature models for the Rage Against the Machine and Audioslave star.

In an interview with Loudwire, during which he showcased several new and rare Fender models, Mooney explained how the Soul Power signature Strat came about, and what’s in the future for the company’s collaboration with Morello.

“I have a 13-year-old daughter, and 18 months ago, I went to the annual fundraiser for her school, and lo and behold, there was a Tom Morello guitar there, signed by Tom up for auction,” Mooney recalls. “And along with it was an hour’s lesson from Tom. So there was no way I was not going to get outbid on that.

“At the end of the session, he said to me, ‘What’s that? What are you playing?’ It was a Chris Shiflett signature guitar. He goes, ‘Oh, you do signature guitars?’ I go, ‘Yeah, we don’t do that many.’ And he goes, ‘Well, would you do mine?’ And I go, ‘You’re serious? You want us?’

“He said, ‘Yeah, I’d like to do them all, because they’re my guitars. Beginning with Soul Power, because that really was an Audioslave guitar, and I’ve moved on from there.’ And I’m like, ‘Of course!’”

Surely, Morello’s iconic RATM parts guitar, Arm The Homeless, is next in the running. Should a signature model ever come to fruition, fans may have expected Ibanez to be the brand for the job, given the Japanese company made Morello’s Arm The Homeless backup, a Roadstar model that also came adorned with hippos. Assuming Fender does indeed make a replica, we’d expect these to be included as a decal, as with the Soul Power.

Another likely candidate is the 'Sendero Luminoso' Telecaster - a stock 1982 Tele that Morello used for just about every drop D-tuned song he played throughout his career.

“The one thing I have always done endorsements for is my music, which is something that I make, and something I believe in. So until I had a guitar that I made and I believe in, I wasn’t going to do that.

“This is a guitar that I am very, very proud of, but I would never have done if there was not a crucial charity/social justice component to the whole procedure.”

During the rest of his Loudwire interview, Mooney demonstrates a number of Fender models by playing a few of his favorite riffs, including Black Sabbath’s Paranoid, Deep Purple’s Black Night and Jimi Hendrix’s Little Wing.

The CEO then moves into altogether heavier territory, with Alice In Chains anthem Man In The Box, Rage Against the Machine’s Killing in the Name, and even a bit of Pantera’s I’m Broken and Slipknot’s The Devil in I.

For more info on the Soul Power Stratocaster, head over to Fender.