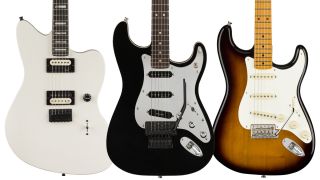 That means we’ll most likely be waiting til Summer NAMM for the company’s influx of artist signatures for female players, but this is a pretty tasty trio to tide us over...

As teased last week, Tom Morello has partnered with Fender to launch a production-line version of his primary guitar during his time with Chris Cornell-fronted supergroup Audioslave.

Morello’s signature features appear in the Floyd Rose locking tremolo (which was an Ibanez Edge on the original), Seymour Duncan Hot Rails stacked bridge humbucker, two Fender noiseless single coils in the neck and middle, plus a kill switch.

A Soul Power body decal is, of course, included, as is a black Fender case - the model is only available in black.

Regardless of whether you enjoy Morello’s fretboard pyrotechnics, this is one nicely spec’d all-out rock guitar. It lands in March.

Jim Root’s existing signature Jazzmaster has been serving as his primary guitar for some time, but the Slipknot guitarist has revamped the model for 2020.

The most notable change is the inclusion of Root’s new signature Daemonum EMG active pickups, as well as a Polar White finish.

As per the original, this is as stripped-back as electric guitars get, with just a single volume control, three-way pickup selector and hardtail bridge.

Other features include a slab mahogany body, maple neck with bound ebony fingerboard and 12” radius and pearloid block inlays.

Recent years have seen the legendary virtuoso turn his hand to semi-hollow designs, but for 2020, Fender has recreated Eric Johnson’s 1954 ‘Virginia’ Stratocaster, which appears on landmark albums Tones and Platinum Ah Via Musicom.

This marks the first time this guitar has been recreated, and boasts a rare rift/quartersawn sassafras body, lacquer finish, custom wiring and more.

Other info is thin on the ground right now, but we do know that this model kicks off Fender’s all-new Stories Collection, which promises to celebrate “the guitars that shaped history’s most iconic music and the details that made them unique”.

The ‘Virginia’ Strat is available in 2-Color Sunburst only from February.

Head over to Fender for more info on all the new models.