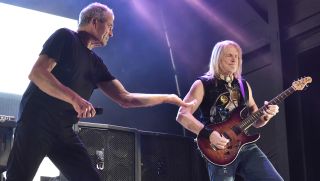 Dipak Rao, a former accountant for Deep Purple, has been sentenced to a prison term of six years and four months after being found guilty of stealing approximately three million dollars from the band.

It was revealed that Rao, 71, had transferred large sums of money—£2.2 million—from the Deep Purple Overseas Ltd. and HEC Enterprises Ltd. accounts, both of which he served as director of, into his own holdings. Reportedly, he used the money to invest in money-making schemes.

Deep Purple first sued Rao in 2014. After the stolen funds were uncovered, Rao resigned from his position at both holding companies in November 2014.

According to a report in Surrey Live, after the civil proceedings Surrey police became involved. The paper reported that victim impact statements read out to court by two of the children of the late Tony Edwards, who was the co-founder of both royalty businesses, “highlighted the devastation caused by Rao's actions, labelling him a ‘deceitful conman.’ "

Rao plead guilty to fraud by abuse of position and transferring criminal property. In addition to his jail term, he has been disqualified from being a director of a company until 2028.