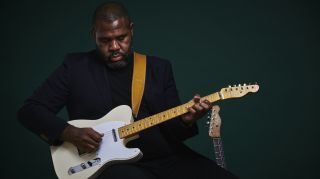 Summer might be in full swing, but, thankfully, neither the heat and humidity nor the continuing effects of the coronavirus have slowed down the world of music.

It can be difficult, especially during these trying times, to wade through the ever-growing sea to find the needle-in-the-haystack tracks that move the guitar forward and stick with you long after the first listen - but that's why we're here to do the searching for you.

This week, we've got a slice of sweet blues perfection from Kirk Fletcher, a massive piece of wall-shaking riff-rock from supergroup Gone Is Gone, a barrage of quality metalcore from The Acacia Strain and a heck of a lot more.

So, who knows? Take a look and you might find your song of the summer.

Kirk Fletcher - No Place to Go

Even if blues isn't usually your genre of choice, there's something beautiful about hearing a master of the craft take a very well-worn form and make something fresh, snappy and exciting out of it.

Few are more at home with the blues than Kirk Fletcher, a distinguished veteran of the Fabulous Thunderbirds, the Mannish Boys, Joe Bonamassa's backing band and more. No Place to Go, the first single from his upcoming album, My Blues Pathway, shows Fletcher in absolute top form.

"I'm not looking for fortune and fame," Fletcher sings at one point in the song, and his stinging - but always supportive - fills and leads reflect that. He knows the song's vivacious horns and his soulful vocals are doing the lion's share of the work, and lets his Strat lend an exclamation point only when it's needed. Now that's the mark of a true master of the blues. (JM)

Gone Is Gone – Everything is Wonderfall

The Mastodon/Queens of the Stone Age and At the Drive-In supergroup return with this monumental slab of sludgy riff-rock.

Troy Van Leeuwen leans heavily on the atmospherics, conjuring extreme tension via heavy fuzz and reverb that floats atop of Troy Sanders and Tony Hajjar’s driving rhythm section. These are the kind of signature sounds we’ve come to expect from the Jazzmaster advocate, and elevate Everything is Wonderfall to an otherworldly realm. (MAB)

Derek Sherinian has amassed quite the number of accolades over the course of his near-40-year career. An impressively adept keyboardist, he’s founded both Sons Of Apollo and Black Country Communion, offered his recording services to the likes of Alice Cooper, Yngwie Malmsteen and Billy Idol, and built a pretty successful solo career.

His new album - entitled The Phoenix - drops September 18, and will feature the likes of Steve Vai, Joe Bonamassa and Zakk Wylde. The record’s first single, Empyrean Sky, is but a taster of what’s to come, and features killer six-stringing from none other than Ron ‘Bumblefoot’ Thal. So sit back, and enjoy this marvelous voyage of instrumental virtuosity. (SR)

There are few certainties in life, especially in times such as these. One of those precious few consistencies though - aside from taxes and the sun rising each morning - are Old 97's, who have cranked out delectable collections of lovable alt-country every couple of years for about a quarter-century now.

The Texas quartet attacks The Dropouts, the opening cut from their upcoming album, Twelfth, with the no-f*cks-given attitude and charisma of the great bar band they are. Dive a little deeper however, and you'll notice how Ken Bethea's memorable leads incorporate Byrds-y jangle, late-night-country-station melancholy and punk scrappiness with equal effectiveness.

Hear the depth and complexity of this barn-burner/drinking song par excellence, and you'll understand why Old 97's have been around for as long as they have. (JM)

The Fall of Troy - We Are the Future

Thomas Erak and his merry band of mathcore pioneers are back, and they’re on absolutely searing form - We Are the Future condenses everything you love about TFOT into four furious minutes.

With the release of new album Slow Decay comes a barrage of quality metalcore that’ll be welcomed by any fan of the heavy. 12 blistering tracks of the group’s best work to date, with guest appearances from the likes of Mortality Rate’s Jess Nyx and Spiritbox’s Courtney LaPlante, it’s certain to get your head banging.

Crippling Poison - the record’s second track - sees the use of demonically drop-tuned guitars aplenty, showcasing the impact a few powerchords can have when used well. This one’s a total knockout. (SR)

Nathaniel Rappole aka Gull made his career performing on streets around the world, and he channels those experiences into new album Relative Stranger, a meditative exploration of what one human can achieve with a Telecaster, a barebones drum set, and whatever other instruments he can get his hands on.

Mouth to Match typifies Rappole’s approach, as he bolsters the crystalline opening guitar line with a bombastic drum beat, fervent vocals and even whispers of saxophone. It’s a beguiling concoction. (MAB)

Elvis Perkins - The Half Life

Until recently, it had been a few years since we last heard from this perennially underrated singer/songwriter, but from the sounds of it so far, Perkins' upcoming album, Creation Myths, will have been well worth the wait.

Its latest single, The Half Life, aches with longing, and is punctuated by muted strumming and pristine pedal steel work that gives it - only days after its release - an ethereal, timeless quality that fits right in with the best of Perkins' work. (JM)

Sleeping With Sirens - Talking to Myself

Merely less than a year after their last album How It Feels to Be Lost, the Orlando hard-rockers have unleashed a new dose of sonic brutality and catchiness in equal measure with their new single, Talking to Myself.

Guitarists Jack Fowler and Nick Martin deliver a no-frills, straight-down-to-business main riff, which segues into the guitar-free verse in which frontman Kellin Quinn serves up a vocal storm. Prepare yourself for the track’s breakdown just past the two-minute mark, as it’s sure to blow your socks off. (SR)