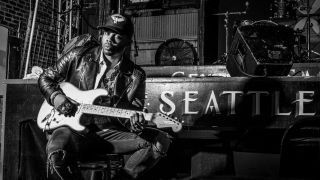 We know that we're very lucky here at Guitar World. You know that feeling, when you discover an awesome new artist and want to tell everyone you know about how great they are? We get to do that as part of our jobs!

On that note, we've got another absolutely jam-packed collection of superb, guitar-heavy music that's come out in recent days for your listening pleasure.

Feeling some raw, game-changing blues? Spin an amazing new song from Ayron Jones. Want to enjoy an iced tea outside and listen to some sweet-as-honey Southern rock? Check out a new single from the Allman Betts Band. Pissed off at your neighbors? No fear, Kiko Loureiro has a new solo tune that'll undoubtedly violate your local noise ordinance if played at a decent volume.

Before you spend hours perusing Spotify, YouTube, Apple Music - or wherever you listen to your favorite tunes - for stimulating new music, stop here first! We might have what you're looking for.

Ayron Jones - Take Me Away

Ayron Jones spans many styles. He hails from Seattle, and carries the emotional weight of that city’s musical heritage - not to mention all-star fans in the form of locals Duff McKagan and Mike McCready - but his fusion of classic and contemporary blues-rock has seen him share stages with everyone from Public Enemy to Jeff Beck.

His debut single, Take Me Away, is a devastating statement of intent, with a punishing pentatonic riff, soaring octave leads and even a Morello-esque Whammy breakdown. The track was inspired by Jones’ troubled past - you feel every word that comes out of his mouth and every note that sings from his Strat. Mark our words: Ayron Jones is going to be big. (MAB)

Of course, the record’s name is not only titular, as he’ll be making stems of all the tracks available, allowing you to “remix, recreate [and] make new versions of the songs.” The guitarist goes on to say: “I can expect different approaches and probably even better versions than mine.”

We’re excited to hear the plentiful fan submissions, but in the meantime, marvel at fretboard wizard’s mind-boggling dexterity and undeniable knack for songwriting and arrangement. (SR)

Given that they’ve repeatedly turned down offers - complete with “insane” amounts of money - to reunite since their indefinite hiatus in 2003, it’s unlikely that we’re going to see a return of the ultimate DIY punk legends, Fugazi, anytime soon.

For now though, we have the phenomenal self-titled debut from Coriky, a new power trio comprised of Fugazi frontman/guitarist/ideological leader Ian MacKaye, Fugazi bassist Joe Lally and drummer Amy Farina, who’s previously collaborated with MacKaye in The Evens, in addition to time with The Warmers.

So no, we’re not getting a Fugazi reunion, but the lurching stop-and-starts, delectable bass line and ferociously dissonant guitar break of album highlight Say Yes should be more than enough to fill your craving for the time being. (JM)

Fusing rock and hip-hop successfully practically requires a degree in genre mixology, but New York’s Oxymorrons absolutely nail the formula. This week, the boundary-pushing four-piece surprise-released new single Justice, to share their own experiences with police brutality and systemic racism - they’ll be donating all proceeds from the song to charities and nonprofits.

The bombastic track showcases guitarist Jafé Paulino’s versatility, as he deftly switches between big chorus chords and textural, effects-driven approaches in the verses, launching a pair of monster riffs in between. (MAB)

Barely a year after their acclaimed debut, Down to the River, the Allman Betts Band have announced another Muscle Shoals Sound Studios-recorded LP, Bless Your Heart.

Though we only have its first single, Magnolia Road, to go on for now, from the sounds of this oh-so-sweet tune, we’re in for another record resplendent with fiery, powerfully melodic guitar goodness.

Punctuated by Johnny Stachela’s lively slide work and a beautifully tuneful and evocative solo from Duane Betts, Magnolia Road is the work of a band that certainly bears the musical and literal DNA of their Allman Brothers Band forefathers (just listen to that solo again!) but is taking the Southern rock sound in a wholly new, and exciting, direction. (JM)

Dream Wife have always toed the line between pop and punk, but this taste of forthcoming sophomore So When You Gonna… unquestionably leans on the poppier side of proceedings - and that’s a very good thing indeed.

Guitarist Alice Go cycles through a host of crystalline chord changes, with a sweet arpeggiated line in the chorus that’s irresistibly catchy. All proceeds from digital Bandcamp pre-orders of So When You Gonna… will be donated to Black Minds Matter and Gendered Intelligence, too. (MAB)

Adding to the ever-growing list of voices expressing outrage at the recent events in Minneapolis and the ongoing scourge of police brutality, Machine Head have penned a two-track single, the former of which - Stop The Bleeding - features Killswitch Engage vocalist Jesse Leach.

The song’s lyrical content and accompanying video leave none of frontman Robb Flynn’s opinions down to interpretation, as he heavily scorns America’s role in institutional racism. The message is further underpinned by the band’s signature destructive guitar riffs, with instances of the natural harmonics that we’ve come to love of the Californian metal powerhouse. (SR)

The Beths - Out Of Sight

Taken from the New Zealand indie-pop quartet’s upcoming second album, Jump Rope Gazers, Out Of Sight is as good a demonstration as any that a masterclass in great guitar tone doesn’t have to be a big, meaty rocker.

Every single layer of guitar on here is a piece of ear candy - from the springy, ping-ponging lead to the rich chording that washes over you in the chorus to the tough, overdriven, but still super-tuneful solo, there’s not a note here that’s out of place. (JM)

One of the UK’s premier indie-rock acts during their Noughties heyday, Doves are back with their first single in 11 years, and the results are utterly life-affirming.