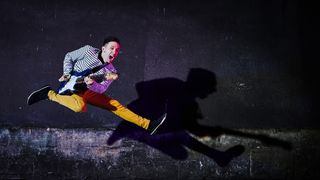 Sadly, this week has seen billions of people still in lockdown due to the coronavirus, which continues to extract an enormous toll on people throughout the world.

Thankfully, our digital world has made it possible for musicians to find all sorts of ways to share their creations - new and old - with us during this challenging time. As always, today we've taken the time to cherry-pick some of the best of those new pieces of music - forward-looking new songs that'll help battle the never-ending 'guitar is dead!' cries.

Whether you're looking to raise your spirits with some face-melting funk, soothe your nerves with a stunning acoustic instrumental, or make your ears bleed with some classic thrash-metal, we've got you covered.

Check out our selection of this week's best tracks below, and see if you discover a new favorite along the way.

He’s the man with the funkiest right hand since Prince Rogers Nelson, and now Vulfpeck groove vet Cory Wong has taken his string of recent floor-filling albums to the next level with a live album featuring a 51-piece orchestra.

The addition of Amsterdam’s Metropole Orkest brings to mind classic ’70s disco and funk anthems, but Wong’s consistently melodic Strat playing adds a contemporary flair, even when he’s tearing up the fretboard - as on the closing solo you’ll have your face thoroughly melted by right here. (MAB)

Just as she always does, on Kyoto, Bridgers perfectly serves the song with her playing. The propulsive riffing makes Bridgers' jetlagged, anxious lyrics - which describe her first trip to Japan - hit harder, while some beautiful leads in the second verse provide a lovely counterpoint to the triumphant horns in the chorus. (JM)

In the UK, this Sabbath-worshipping stoner outfit are often known as Pigs x7, but sonically, they should be called Riffs x7. Deep, sludgy, gut-punching refrains hit one after another, in the manner of the best Melvins output, as Rubbernecker very much attests.

Fans of Kyuss, Torche and High On Fire would do well to bow down at the 4x12s of their quaking Orange stacks. (MAB)

The Strokes - Brooklyn Bridge To Chorus

The quintet that kickstarted a tidal wave in rock music, and inspired untold thousands to pick up the guitar - and look at it for inspiration again - are back with their first album in seven years. Even if it finds the band more comfortably stretching their legs into twisty structures and synths than ever before, The New Abnormal is chock full of the tight, hooky riffing that earned The Strokes the lofty, festival-headlining perch they currently enjoy.

Brooklyn Bridge to Chorus is really the perfect name for this, one of the album's brightest spots. The song can hardly wait to dive into that pitch-perfect chorus, where those bratty, beautifully intertwining leads from Nick Valensi and Albert Hammond Jr. take you right back to when this band was one of the most exciting on the planet. (JM)

Testament - Children of the Next Level

Last week, thrash metal titans Testament released their fittingly-titled thirteenth studio album, Titans of Creation and it’s clear that the five-piece, almost four decades into their career, show no signs of letting up.

The record’s first track Children of the Next Level is awash with the greatest distinguishing features of thrash: palm-muted triplet-laden riffs, multiple winding guitar solos and blistering drum parts to match.

Following the news that vocalist Chuck Billy and bassist Steve Di Giorgio recently tested positive for COVID-19, we at Guitar World would like to take this opportunity to wish them a speedy and full recovery. (SR)

Buck Curran - No Love Is Sorrow

Stuck at home in Bergamo, Italy - one of the early centers of the COVID-19 outbreak - singer/songwriter/guitarist Buck Curran recently decided to rush-release his third solo album, No Love Is Sorrow, to help financially support his pregnant wife and young son.

With the majority of us stuck in our respective homes, the album's stunning title track is the perfect song to throw on and daydream to. An immaculately constructed, seven-minute acoustic soundscape, this is a piece of music that plays like a great novel, whisking you away to an environment far from your own, and never letting go. (JM)

Billy Talent - I Beg To Differ (This Will Get Better)

A welcome dose of hope during these uncertain times, Billy Talent’s I Beg To Differ is the Candian quintet’s third single released ahead of their upcoming sixth studio album.

While the guitar parts are relatively simple, they suit the track perfectly, showing that virtuosity isn’t always everything when it comes to conveying raw emotion in music. This being said, the clean arpeggios and driven powerchords provide some serious ear candy. (SR)