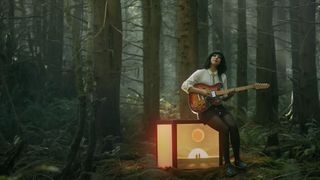 Can you believe summer’s almost reached its end? Depending on who you’re talking to, it either feels like the season’s been 3 days, or 300 days. Or somehow both at once.

Either way, this season-closing week has produced a ridiculous group of fantastic tracks from guitar-toting artists in everything from folk to nu-metal-spattered hard-rock.

Want to soak in those last precious days of the season with some quintessential surf sounds? We’ve got some cavernous spring reverb and fat single-note lines from Martin Cilia and Joe Matera. Not doing too hot? Nursing some heartbreak maybe? We’ve got a gut-punch of an acoustic waltz from Angel Olsen.

We’ve got plenty of stuff in between too, don’t worry. Start scrolling and see!

Seattle quartet Deep Sea Diver knew they had a winner as they were recording the infectiously funky title track of their upcoming third album. Singer/guitarist Jessica Dobson, however, had just seen Sharon Van Etten in concert, and felt that the A-list singer/songwriter could potentially add some touches to put the song over the top.

And put an exclamation point on this swaggering earworm of a tune Van Etten does, working with the track’s brash, chunky guitar leads to add an otherworldly, gothic touch to this otherwise radio- and even dancefloor-primed slice of indie perfection. (JM)

Swiss-American musical prodigy Manuel Gagneux has surprise-released his first new material since 2018’s astonishing Stranger Fruit, in response to the spate of racially aggravated police killings in the USA.

Vigil displays Gagneux’s trademark combination of roots chants and post-rock tremolo picking, but a delicate piano refrain adds a powerful sense of pathos. All proceeds from the track and forthcoming EP, Wake of a Nation, will be donated to Justice for Jacob Blake. (MAB)

The trailblazing Aussie gunslinger has finally revealed the first track from her upcoming album, O, and it’s a Kravitz-vibed riff-fest.

High-gain fuzz is Orianthi’s tone of choice for the track’s chunky rhythms, while the solos employ some deft wah usage and wailing bends, all of which bodes well for the rest of the release.

Interesting to note the Flying V in the video, too – could Ori be making the jump to Gibson? After all, she’s already confirmed a signature acoustic with the brand… (MAB)

For her 2019 album, All Mirrors - a remarkable document of the searing pain and emotional fallout of a breakup - Angel Olsen took two entirely different approaches. She had initially seen the record as a return to her roots of sorts, and recorded the songs solo at a church studio in rural Washington.

However, she soon decided to have a second go at the album, re-recording many of the songs with a 12-piece orchestra. It was this version of the record - replete with luscious, explosive arrangements that worked immaculately in tandem with Olsen’s peak-of-her powers songwriting - that saw the light of day last year.

Chance, the album’s blockbuster closer, held absolutely nothing back. Fleshed out with titanic, Golden Age of Hollywood strings, it played with the grandiose tragedy of Juliet awakening to discover that her beloved Romeo has already drank the poison.

On the newly-released, stripped-down version of the song -  Olsen’s acoustic playing stoically stares you down, tethering the song to earth while she paints a soul-crushing picture of loss and heartbreak with her jaw-loosening vocal performance. In a world full of breakup ballads, this gut-punch of a waltz - akin to watching a proud, beautiful house slowly collapse into rubble - will stop you dead in your tracks. (JM)

The UK metalcore bruisers are on a roll right now, and we can see this latest effort ranking rather high in our riff of the year list.

Obey sees Oli Sykes and co team up with UK punk Yungblud for what can only be described as an electronically bolstered banger. Meticulously arranged, expertly delivered, Obey is colossal in every sense. (MAB)

The first track to be unveiled from from the band’s sophomore effort ticks every box on the modern metal checklist, with devastatingly tight triplet chugs, harmonized solos and big choruses. New album Reluctant Hero drops on November 20. More, please. (MAB)

Kelsey Marchman, guitarist for Denver hard-rock outfit Thousand Frames, branches out on her own with this blistering debut solo single, inspired by the ongoing struggle against racially motivated police brutality.

There’s a heavy nu-metal undercurrent to Better Late Than Never, as Marchman delivers huge distorted powerchords befitting of the track’s message, before bringing it home with a catchy, melodic solo. (MAB)

Fresh off of making not one, but two, of 2019’s best rock albums with Big Thief, you’d think Adrianne Lenker would be due for a year off. Of course, though, the ever-prolific Lenker took the world’s forced downtime as an opportunity to craft two new albums - songs and instrumentals, both of which are due on October 23.

On Anything, Lenker’s world-dominating form continues unabated. She effortlessly paints a gorgeously vivid picture of romance that in three minutes captures its most breathless heights and nerve-wracking points of tension with equal grace and weight.

As Lenker’s hypnotic acoustic fingerpicking unfurls, you can’t help but sit back in awe at how easy she makes it all sound. (JM)

RavenEye - Into the Mystic

To celebrate Van Morrison’s 75th birthday at the end of August, the Oli Brown-fronted blues-rockers tone down the distortion and offer their take on one of Morrison’s most enduring tracks.

Brown can always be relied upon to deliver a vocal lead, and Into the Mystic borders on Mayer levels of tonesome phrasing. It’s a beautifully realized cover of a classic. (MAB)

A mutual love of the Shadows brought these big-name Aussie guitarists together for a new instrumental that stays true to the quintessential surf sound.

As you’d expect, cavernous spring reverb and fat single-note lines are the order of the day, with melodies to match. It’s faithfully delivered, feelgood stuff - and we could all use a little dose of that right now. (MAB)