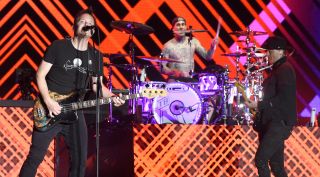 One thing has remained constant throughout this strange period we find ourselves in: artists have continued releasing killer music. And at Guitar World HQ, we've been on the lookout for the crème de la crème, selecting only the hottest six- (and seven-) string tracks for our loyal readers.

Whether you're feeling some cathartic, topical pop-punk from one of the masters of the genre, heavy riffs that'll get stuck in your head for days or an unexpected prog-metal reunion, we've got you covered!

So sit back, and absorb some of the tastiest tracks guitardom has to offer.

It’s been more than a decade since we last heard John Petrucci play with his one-time Dream Theater partner in crime, drummer Mike Portnoy. Petrucci’s new solo album however, has unexpectedly brought the two back together, and from the sounds of it, the reunion is an oh-so-sweet one.

Terminal Velocity - the title track and lead single from the new solo effort, Petrucci’s first in 15 years - is rife with everything that makes Petrucci one of the best guitarists in the world today.

Brick-wall riffs? Check! Technically dazzling, light-speed lead runs? Check! Ever-changing tempos and time signatures? You betcha! What makes the track really stand out though is that - even in the absence of vocals and with all of this technical wizardry - Petrucci never loses sight of the song’s strong melodic underpinning, the element that really makes the track one of the more impressive entries in his recent catalog. (JM)

Returning with their latest full-length Hunter Gatherer, the Swedish subgenre-fluid five-piece have unleashed what you might concur is their most ambitious effort to date, voyaging through ferocious heavy metal and more delicate arrangements alike.

A Secret Door - the record’s third track - puts the band's ability to traverse styles on full display, with everything from heavy metal screaming to stripped-back, clean-guitar-driven sections to theatrical whistling melodies. Avatar are back, and stronger than ever. (SR)

Leave it to one of America’s favorite pop-punk trios to channel all of the country’s collective frustrations about a ruthless pandemic and its cataclysmic effects into a sardonic, hilarious, sub-two-minute rush of guitar-packed sing-along goodness.

“Quarantine, f*ck this disease,” goes the chorus. “I’d rather be on Star Tours or stuck at the DMV.” I mean come on, who doesn’t want to scream, or play air power chords, along to that? (JM)

When a new Gojira track drops, it’s a must-listen for any heavy-inclined guitarist. Guitarists Joe Duplantier and Christian Andreu deploy driving guitar lines with full effect on the group’s latest standalone single, Another World - which deals lyrically with the prospect of humanity’s future.

The track’s main guitar riff is a true earworm, so prepare to have it join you for the rest of your day upon listening for merely 5 seconds. But you’ll enjoy it. (SR)

Bully, the project of Tennessee-based singer/guitarist Alicia Bognanno, have been crafting some truly awesome rock songs for a few years now, so naturally we’re quite psyched for their upcoming third album, SUGAREGG. This week, we were treated to the record’s third single, Hours and Hours.

With its deeply personal lyrics and grungy loud-quiet-loud structure - complete with a hurricane of distorted guitars in the chorus that would make even Billy Corgan blush - Hours and Hours is a perfect fit for just about any alt-rock playlist. (JM)

With straight-up metal section arrangements, digital drum processing and synth lines, huge-sounding orchestral parts and thought-provoking lyrics, One Folk is a symphonic metal masterpiece and well worth a spot on this week’s list. (SR)

One of the most most exciting punk bands to emerge anywhere in the last few years, PUP are back with a delightfully tuneful gem of a take on one of their favorite songs, Grandaddy’s A.M. 180.

Just as they do with their own material, co-guitarists Stefan Babcock and Steve Sladkowski approach this beloved song with a delectable cocktail of dissonance, unpredictability and go-for-the-throat attitude - all the while giving the song's hooks plenty of room to shine. (JM)

Earlier this week, the Kentucky rockers announced their new studio album The Human Condition, and dropped its first single, Again. With a bedrock of distorted guitar and hard-rock songwriting, acoustic guitar is written tastefully into the verses, leading to a wonderfully diverse listening experience.

The track’s awesome guitar solo will surely have you whipping out your air guitar. Okay, perhaps not, but it does round off this track as one of this week’s most essential listening experiences for six-stringers. (SR)