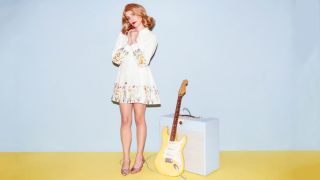 We know you've been eagerly awaiting this moment all week. That brief moment of respite, of calm, of complete and utter immersion in new guitar music. Yessiree, it's this week's essential guitar tracks.

As always, we've searched far and wide to bring you the most exciting playing from every nook and cranny of the six-string sphere. We've got fuzz-heavy synth-pop (Sad13), all-out metal bruisers (Mr. Bungle, Like Moths To Flames), ambient head-trips (DARK, Tabal) heavy hip-hop and dance crossovers (North Kingsley, Ashba), and, of course, some classic rock to boot (thank you, Songhoy Blues).

Yes, it's a veritable smorgasbord of playing and tone, and we'd encourage you to tuck in, post-haste. Let's start with…

Oops…!, the second single from Speedy Ortiz frontwoman Sadie Dupuis’ second solo album, pulls no punches. It finds Dupuis taking on a venue employee who verbally and physically roughed up one of her bandmates, then offered a half-hearted apology to Dupuis instead of the bandmate, "presumably because I am smaller and present feminine," Dupuis said.

The guitars lurch, preen, follow the melody and carve their own path all at once, serving as the perfect partner-in-crime and counterpoint to the song’s bubbly electronics and sneaky hook. Though catchy as hell, this song cuts deep, and definitely encourages multiple listens - not that you’ll need the encouragement anyway. (JM)

The beloved Mike Patton-fronted alt-metallers went through many permutations throughout their original tenure, but their first release in 21 years harks back to their early thrash days, re-recording and re-invigorating their 1986 cassette-only demo, The Raging Wrath of the Easter Bunny.

Original guitarist Trey Spruance is joined by Anthrax's Scott Ian for this masterclass in metal - and it turns out Ian’s precision-engineered palm-muting and Spruance’s frenzied tapping and whammy dives are a match made in heaven… or hell. Thrash perfection. (MAB)

The Mountain Goats - As Many Candles As Possible

Read the pages of Guitar World any given day and you’ll probably find it full of guitarists who - over their technical prowess on the instrument - tell us that they wish more than anything to tell a story with their playing.

Just about no singer/songwriter on earth can tell a story like John Darnielle, who for almost three decades has filled The Mountain Goats’ music with unforgettably gripping tales of insurance fraud, dysfunctional families, irreparably broken relationships, pro wrestlers staring down the brutal decline of their careers… one can go on and on.

He’s in vintage form on As Many Candles As Possible, the lead single from Getting Into Knives, the Mountain Goats’ second album of 2020.

Darnielle and his ever-underrated cast of musical comrades, as ever, give the song only what it needs musically. Though devoid of flamboyance, the song’s snarling, fuzz-drenched rhythm guitar is waiting to pounce at any moment, and you better believe that the chase is thrilling. (JM)

Daren Jay Ashba has a long list of accolades to his name. Working in various capacities with such names as BulletBoys, Beautiful Creatures and, of course, Guns N’ Roses, he’s built quite the hard-rock reputation. And when he puts down the axe he’s a sought-after record producer and graphic designer, too.

Now, he’s thrown his hat into the ring of EDM, weaving creative six-stringing into an electronic sonic backdrop on his new solo track, Hypnotic, which utilizes some creative kill-switching sure to get the crowds moving (when it's safe to do so). (SR)

Songhoy Blues produce some of the raunchiest, edgiest rock to come out of Africa, and with Desert Sessions collaborator Matt Sweeney behind the desk for new album Optimisme (due in October), their energetic live sound has finally been captured on tape.

Badala is the first track to surface from the record, and sees guitarist Garba Touré tear up a fuzzy riff reminiscent of the Black Keys at their fieriest, before he races through a demonic diminished breakdown line. On this evidence, Optimisme could well be Songhoy Blues’ best album yet. (MAB)

From System Of A Down bassist Shavo Odadjian comes a new project: North Kingsley. Together with producer Saro Paparian and lyricist/vocalist Ray Hawthorne, the group have unleashed their debut single, Like That?

The lyrically impactful tune incorporates ominous and textural guitar lines throughout, and combines rock and hip-hop in a fresh and successful way. (SR)

As always, Garg pushes the limits of what the guitar is ‘supposed’ to sound like, conjuring cinematic atmospherics with only his Abasi eight-string and a wealth of ingenuity. (MAB)

In recent years, we’ve seen how fusing djent and pop can be a surprisingly successful formula, and this new release from multi-instrumentalist singer-songwriter Maxi Curnow provides yet further proof.

Curnow uses his songwriting nous - honed over years of producing music for shows from the likes of the BBC and Netflix - to sharpen the Strandberg seven-string assault of Tar & Honey.

T&H is full of inventive heavy ideas, including a serpentine main riff, sporadic taps and runs, and rhythmic percussive muting - fans of Plini, Karnivool, TesseracT and co will be all over this. (MAB)

This French producer specializes in hypnotic, luscious lo-fi hip-hop beats, of the beautifully bleary, perfect-for-the-wee-small-hours variety. Immersive enough on their own, Tabal’s beats are oftentimes accentuated - and set apart - by his equally bewitching guitar work.

Crystal Land is a compact thing of beauty, led by a gorgeous melody and a beat that waits until you’re comfortable to envelope you. Once you’re settled, Tabal sprinkles in a beautiful lead guitar refrain - the final coating of sugar that makes Crystal Land nothing short of a dream. (JM)

On the latest single from upcoming debut Staring At Clocks, these upcoming Irish rockers fuse shoegaze and grunge to intoxicating effect.

Offset-toting singer Lizzie Fitzpatrick stabs and soothes with her versatile arsenal of tones, which range from shimmering cleans to lashings of fuzz. (MAB)

London noise-punks USA Nails are a supergroup of sorts, made up of a cavalcade of UK underground heroes, including Blacklisters, Kong, Oceansize, Silent Front, Death Pedals, Future of the Left and Dead Arms.

But they’re also the scuzziest, nastiest supergroup you’ve ever heard - Revolution Worker is a two-minute blast of acerbic fuzz and pick scrapes. The entirety of the band’s forthcoming fifth album, Character Stop, was tracked live, and that dirt and ferocity slashes its way through the speakers. (MAB)