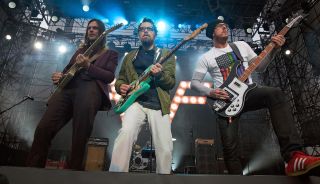 Sit back. Exhale. The week's over! You did it. Time continues to feel stranger than ever as we collectively work our way through another week of the coronavirus pandemic and its effects, but it is indeed Friday, and you deserve a breather.

And what better way to unwind than with some killer new music? Despite the virus' enormous effects on the music industry, fantastic new tracks from guitarists of all genres and musical inclinations have continued to rain down on us. By that metric, this week was a great one.

This was a week that saw Weezer dust off another single from Van Weezer, their highly-anticipated new, 80's-worshipping shred-fest of an album. Meanwhile, if you like your music more tense than tongue-in-cheek, we have a bone-chilling breakup song from Johanna Warren. Or, if something more low-key seems in order, we have an irresistibly soulful new number from Lianne La Havas.

So grab a pair of headphones, turn up your speakers and enjoy everything the guitar has to offer this week.

First, the bad news: Weezer have delayed the release of their ’80s hard rock-inspired new album, Van Weezer, due to COVID-19. Now, the good news: the band has a new single out, and it’s precisely the feel-good rock anthem we need right now.

Accompanied by a video dedicated to the heroes of the pandemic, Hero sees Rivers Cuomo don a none-more-’80s Guild X-88 Flying Star and deliver trademark Weezer hooks and meaty powerchords, before some slick pull-off licks and stacks of harmonized leads confirm that, when it eventually lands, Van Weezer will be a monster guitar album. (MAB)

2020, as with every year, will undoubtedly see the release of countless breakup songs - in every musical form, genre and language imaginable. Though the year remains young, it's hard to see how Twisted - an absolutely spellbinding, gut-wrenching song from Oregon-based singer/songwriter Johanna Warren - won't rank as one of the year's best.

What the guitars on this explosive track lack in technical complexity they more than make up for in atmosphere-building. While Warren works her way slowly, but with brutal effectiveness, to a throat-shredding scream in the song's climax, the taut guitars churn away, giving you the feeling of watching an oblivious, doomed character in a horror movie.

Though her stock-in-trade leans far more to the folk side, the awe and catharsis Warren elicits from the song's jaw-dropping final 30 seconds would give even the most aggressive of metal bands a run for their money. (JM)

The Dublin post-punk outfit had a phenomenal 2019, earning stellar reviews for debut album Dogrel and even landing a nomination for the UK’s prestigious Mercury Prize. But now, barely a year later, Fontaines D.C.’s second effort is already on the cards.

A Hero’s Death does nothing to temper D.C.’s no-holds-barred sonic fury, but it does channel a more measured, brooding vibe than previous efforts. The track’s cyclical, ever-descending riff points towards (even) darker territory for the full-length of the full name, which lands on July 31. (MAB)

Rob Chapman has taken many forms over the years; YouTuber, gear demonstrator, entrepreneur, guitarist and vocalist, to name a mere few. But you may not have heard of his latest form: Monkey Lord.

Ditching the microphone and focusing solely on instrumental music for his latest solo project, Chapman has so far dropped one EP entitled Chromatic Aberration. And now he reveals a new version of the EP’s title track which he’s dubbed Lucid Mix. It’s an ambient audial journey with textured guitar parts and intriguing sound effects and, needless to say, it’s pretty far sonically from his work in Dorje and Clockwork Wolf & Co. (SR)

Christian Lee Hutson - Get The Old Band Back Together

Singer/songwriter and guitarist Christian Lee Hutson - best-known for his brilliant collaborations with Phoebe Bridgers - will finally be releasing his long-anticipated new solo album, Beginners, in a few weeks' time. From the sounds of its final advance single, Get The Old Band Back Together, it'll have absolutely been worth the wait.

Hutson's wry, witty lyricism manages to be moving without ever taking itself too seriously. His folksy acoustic strumming gives the track a solid backbone, while the leads - courtesy of Hand Habits' Meg Duffy - cement this as the perfect, country-tinged pop gem it is. (JM)

South London’s most soulful singer-songwriter - and Prince protégé - has spent much of the five years since her last studio album travelling back and forth between the US and the UK - and Paper Thin draws from the best of both.

The track’s sparse Motown grooves give La Havas’s delicately vibrato’d fingerpicking plenty of room to breathe, before the irresistible sliding refrain takes the chorus home. As for the vocals… Nothing compares.