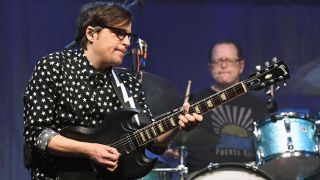 If you hadn’t seen Weezer live, you might not be aware that Rivers Cuomo is a full-on ’80s shred god in Buddy Holly clothing, but that’s all about to change if the band’s new album is anything to go by.

Entitled Van Weezer, the new full-length is set to be stuffed to the gills with electric guitar and shredding, as the frontman revealed to Zane Lowe on Apple Music’s Beats 1 while unveiling new single The End Of The Game - which reportedly features 100 guitar overdubs.

“Last album we didn't have any guitars, this one is just all guitars. A hundred guitars,” says Cuomo.

“This is all from playing shows, and we just noticed over the last few years there'd be these moments during the show where I'd accidentally bust out a few harmonics or a whammy bar dive or a little tapping just because I can't control myself.

“And we noticed like unlike in decades past, now the audience would go ballistic whenever they'd hear even a hint of that style. So I started doing it more and more. And soon I'm just like shredding through the whole show and we're like, ‘Jeez, we should make an album like this.’”

Cuomo was appearing on Beats 1 with Billie Joe Armstrong and Pete Wentz to announce a joint headline tour with Green Day and Fall Out Boy, entitled The Hella Mega tour.

Green Day also debuted new track, Father Of All, on the show, which will appear on the band’s new album, Father Of All Mother***kers, due out in spring - around the same time as Van Weezer.

There will be a Fall Out Boy Best Of to accompany that band’s new track Dear Future (Hold Up), which was also debuted with Lowe.

The trio delved further the rumors regarding Cuomo’s long-mythologized shredding ability, which the frontman was happy to address.

“We were making the Blue Album, our first album with Ric Ocasek, and so all he knows is our demo tape, which has not much shred on it at all and pretty simplistic guitar playing. We're halfway through making the album and that's all he's ever heard me play.

“And then he walked in the other room and then suddenly I let loose with some Yngwie Malmsteen shit. And he was like, ‘What the hell?’

“So it's finally coming out on Van Weezer.”