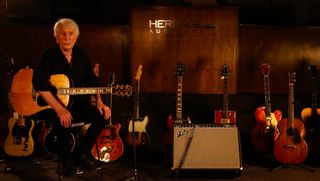 Graham Nash will be selling off 19 instruments from his personal collection through Heritage Auctions on July 21 and 22. Among the instruments set to go up for auction include the famous 1969 Martin D-45 he played with Crosby, Stills & Nash at Woodstock, as well as instruments that once belonging to Duane Allman, Johnny Cash, Stephen Stills, Bo Diddley and others.

You can check out some of the guitars below, with commentary from Heritage Auctions.

Nash played this guitar onstage with Crosby, Stills & Nash at the Woodstock festival. He paid for the Martin using some of the advance the trio received from their first recording contract with Atlantic Records. The guitar is all original, and features Brazilian rosewood. "We each bought D-45s from Martin,” Nash said. “That was 1969, and so right before Woodstock, we bought these guitars and took them to Woodstock."

This is best known as the guitar he played on the live recording of "Statesboro Blues," the opening track of At Fillmore East. It is currently on display at the Metropolitan Museum of Art in New York as a part of the "Play It Loud: Instruments of Rock and Roll" exhibit. Said Nash, “This is the famous From 'One Brother to Another' guitar, traded between Dickey Betts and Duane on all their live shows, [like at] the Beacon Theatre in New York. This is a very special guitar. Duane was obviously one of the great guitar players in the world. To be able hold his guitar and humbly play A minor, that's about the best I can do.”

This guitar was owned and played by Stephen Stills while he was a member of Buffalo Springfield. Nash has played it as well. Said Nash, "I have nothing from the Hollies because it wasn't important. We were so busy being the Hollies and making the next record. We didn't think that stuff that we had would be collectible years later. Stephen had no concerns with parting with this guitar."

Nash played this guitar at the very last show Crosby, Stills & Nash ever performed. Said Nash, "I played this Esquire for years. As a matter of fact, this was the guitar I was playing on the very last show of Crosby, Stills & Nash ever. It's a great guitar. It's a great tone. John Gonzalez, my guitar guy for almost 30 years, says this sounds great in the front of the house. I'm so lucky."

This guitar was owned by Johnny Cash and is personally etched by Johnny and June Carter Cash with a penny nail. Nash has played it as well. Johnny's autograph is noticeable on the back in the center, while "Love You" etched by June, is on the back, bass-side upper bout. The guitar features a Brazilian rosewood neck.

For more information and to see the full lineup of guitars, head to Heritage Auctions.