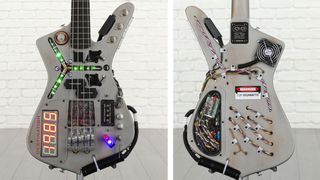 We all remember the sweet Gibson ES-345 electric guitar that Marty McFly rocked at the 1955 Enchantment Under the Sea high school dance in Back to the Future. But what about the Time Machine bass?

Doesn’t ring a bell? That’s because it comes from the future – or as it were, our present day.

Now that Time Machine bass has been sold – and for a good cause.

The proud new owner is Arend Raby, a bass player and collector who works for Sweetwater. What’s more, 100 percent of the proceeds from the sale were donated to the Michael J. Fox Foundation for Parkinson’s Research.

The donation was made in honor and memory of Robert K. Blackburn, father of Bill Blackburn, the runner-up in the sale process.

According to Donor, construction of the components, as well as building them into the bass body, required roughly 300 work hours over the course of three years.

Upon completion, a number of professional bassists took the Time Machine for a test drive – among them Billy Sheehan, who no doubt ran his fingers over the fretboard at upwards of 88 miles per hour.

For more information on the Time Machine, head over to Doner Designs.