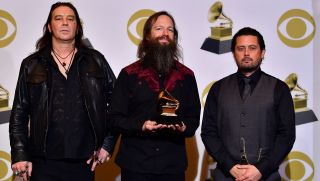 Greta Van Fleet were awarded a Grammy for Best Rock Album, with their From the Fires EP beating out offerings from Alice in Chains, Ghost, Fall Out Boy and Weezer.

High on Fire’s “Electric Messiah” won the Best Metal Performance Grammy, coming out tops in a category that also featured Deafheaven, Trivium, Underoath and Between the Buried and Me.

In the Best Rock Performance category, Chris Cornell won for his song “When Bad Does Good.” Other nominees included The Fever 333, Arctic Monkeys, Greta Van Fleet and Halestorm.

Finally, the Best Rock Song Grammy went to St. Vincent, for “Masseduction,” who was nominated alongside Ghost, Twenty One Pilots, Bring Me the Horizon, and, once again, Greta Van Fleet, in the category.

The full nominee list in the above categories was as follows:

Greta Van Fleet, From the Fires

Between the Buried and Me, "Condemned to the Gallows"

Underoath, "On My Teeth"

Arctic Monkeys, "Four Out of Five"

Chris Cornell, "When Bad Does Good"

Bring Me the Horizon, "MANTRA"

For more information and a full list of winners, head over to Grammy.com.