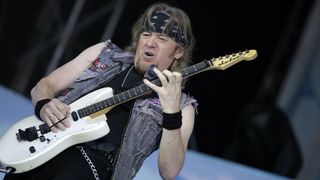 Adrian Smith might be gearing up for the release of his first book, Monsters of River & Rock: My Life as Iron Maiden’s Compulsive Angler, but the Maiden electric guitar player also has something else more musical in the works, hinting at a rumored collaboration with Richie Kotzen.

As for whether there’s a possibility of any live dates from the project, Smith said, "Hopefully, hopefully. It depends on the bloody virus, you know? At the moment, everything's screwed, so…"

@misteradriansmith and I discussing the magic of writing songs in C-sharp minor. Richie Kotzen

Recently, Kotzen has posted photos his Instagram page of he and Smith spending time together, leading to speculation that the Winery Dogs singer and guitarist has been working with the Maiden man on new material.

Elsewhere in the interview, Smith answered affirmatively when asked if he might have a “guitar book” in him as a follow up to Monsters of River & Rock.

“Yeah, I was bitten by the bug when I was a kid, you know; Ritchie Blackmore, Paul Kossoff, all those people, I was just fascinated,” he said.

“I actually started off as a singer / guitarist. I was more of a singer because I hadn’t really played a guitar. I kind of blagged my way into [Maiden guitarist] Dave Murray’s world – he was already quite competent – by saying I was a singer. So we started jamming, and I learned as I went along.

“But yeah, I had a love/hate relationship with the guitar. I used to beat myself up about it. I was never really taught by anyone, I didn’t have a mentor; it was all self-taught.

“Don’t forget, at the time when I joined Maiden, we were going out with Judas Priest; we had Yngwie Malmsteen open up for us; Michael Schenker, and I was thinking; I grew up idolizing Michael Schenker, and he’s opening up for me? I just felt a bit of insecurity about it – not so much now, but because I didn’t really have any training."