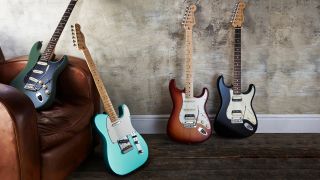 Fender’s American Professional Series debuted to much fanfare a few years back – we were big fans of the Strat and Tele electric guitar models – but it seems as if the line might be ready for an overhaul.

A recent conversation on Reddit begins, “Hey guys, so I just heard from a local music store that they are no longer going to be receiving the American Professional Series instruments due to them being discontinued though I can’t find anything online about this. Has anyone heard anything like this?”

Comments on Reddit, of course, should hardly be taken as gospel. But a quick check of the Fender website reveals the Strat presently being offered in just one finish (Candy Apple Red) and the Tele in two. There’s also a Stratocaster Shawbucker model and just a smattering of Jazzmasters, Jaguars and basses.

Furthermore, Gearnews.com reported that it reached out to Fender about the matter and received a reply stating that “some American Professional lines are currently being phased out”. At the same time, the site was told to “expect future product launches,” which means we could possibly be seeing a refresh of the line soon enough, with new features or upgrades.

Finally, in a 2019 interview with Reverb, Fender CEO Andy Mooney stated that the company "cut our life cycle for products to four years as opposed to seven." The American Professional Series was introduced at the tail end of 2016, which means a change could soon be afoot.

Fender has already unveiled a raft of new products this week - could the company have more in the bag for 2020? We'll keep you posted...