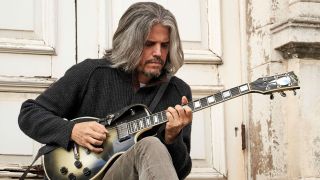 Back in January, we reported that the Gibson Custom Shop had confirmed the existence of the long-rumored Adam Jones Silverburst Les Paul, a signature version of the Tool guitarist’s original 1979 Les Paul Custom Silverburst electric guitar.

Now, both Jones and Gibson CMO Cesar Gueikian have revealed that the guitar is in the production stage.

“Yes it’s #official,” wrote Gueikian on his Instagram page, next to a photo of him posing with Jones, Silverburst in hand.

Jones, for his part, posted a pic of Silverburst body blanks at the Gibson Custom Shop on his own Instagram, with the caption, “It doesn’t get more official than this. Gibson Signature Guitars now in production!”

“I have a true love for that color and that guitar in general,” Jones said of the Silverburst last year during our all-encompassing interview on Tool’s new album Fear Inoculum.

“I believe that particular metallic paint does something to the tone or the resonance or the polarity somehow.”

We will, of course, bring you more info on the forthcoming model as soon as we have it.