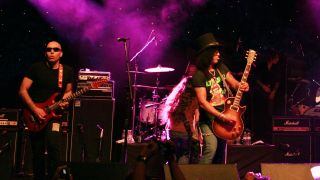 Jonesy’s Jukebox, the interview show hosted by Sex Pistols electric guitar legend Steve Jones, never lacks for interesting conversation. And to be sure, Jones’ recent chat with Joe Satriani was another episode that didn’t disappoint.

After Jones mentioned that he had first met Satriani years earlier at an all-star Camp Freddy show at the Warfield in San Francisco, Satch recalled an interesting story from that night involving one of the evening’s other performers, Slash.

“I’ll tell you a funny story about that gig,” Satriani began. "So there's a bunch of musicians onstage, people are coming, going, and no one really feels totally comfortable, it's not their usual gig. And I had been up there playing, trying to get through these songs while different singers came up. And Slash came up.

“He comes up and he had to fit in real quick, you know, plug in, get a sound, bam, we're playing. And some guys, they have to keep spitting onstage - there are musicians that do that, right? And so I guess Slash is one of them.”

Satch continued, "So I'm getting ready to step up to my wah pedal, and he just turns, like, he doesn't know where to spit, he's not in his usual spot. So he just spits and it lands right on the top of the wah-wah pedal.”

As for what Satch did with the, um, specially modded wah?

"I just left it at the theater,” he said. “I never touched it. I know I should've saved it maybe and put it in a box or something. Sell it on eBay, right? Genuine Slash loogie. But who knows what it would look like now.”

"But no, I left it. So some lucky person working the theater [took it]. Maybe Slash took it, I don’t know. Maybe he collects his loogies.”

At this point, Jones jumped in, suggesting, “He could make a living doing that. Just buying a bunch of wah-wahs and selling ‘em.”

Responded Satch, “He played great that night, so whatever it is, it's working. I don't want to stop it."

The spit story, not surprisingly, later led to a conversation about the current coronavirus pandemic sweeping the globe. And while there has been plenty of discussion about how the crisis is affecting musicians, Satriani brought up what is perhaps a less-discussed consequence of the virus.

“If you play harp or guitar or any other stringed instrument, you're always worried about your calluses,” Satriani said. “So the washing of the calluses is a very sort of personal, protective thing.

“So when there's a scientist on CNN saying, 'You gotta wash your hands every 25 minutes,' you're like, ‘Well, wait a minute. How am I gonna do that if I'm trying to maintain the perfect callus so I can play, you know, a high G on the E string?' So yeah, there's a lot of alcohol swabbing going on.

"I’ll let your minds think about that for a while.”

Just last week, Satch named who he thinks will be the next shredder to "explode on the scene", during a promotional spree for new album, Shapeshifting, due out in April.