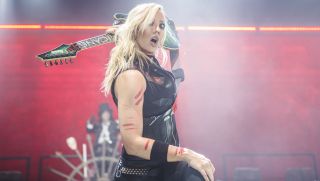 Joe Satriani recently released a throwback new song, Nineteen Eighty, but the electric guitar player is also looking to the future when it comes to shredding.

Asked in a recent interview about the last time he was wowed by a musician, he went on record about his admiration for Nita Strauss.

“I was down in Los Angeles not too long ago for the NAMM show,” he told the Talkin’ Rock with Meltdown podcast. "And I was standing onstage next to Steve Vai and Yvette Young and Paul Gilbert, you know, the whole band, those guys are amazing.

"But Nita Strauss, she was really good. She really brought it. She’s like the whole thing. She's got a sound and her technique's amazing, and she's a really great performer, and it was really cool to see her just be able to flow with older players like myself and Steve and Paul and the younger players like Yvette and the guys from Polyphia.

"I just thought it was kinda cool. I just thought, 'That's a mark of someone who's going really far.' Even though she's been a pro for a long time, you know, she's out on tour all the time with Alice Cooper. As a solo artist, I think her time is coming. She's about to explode on the scene."

Footage of that very jam, which took place at the House of Blues in Anaheim on January 18, can be seen above.

In other Strauss news, the guitarist recently released her second collaboration with Ibanez, the affordably priced JIVAJR signature model.