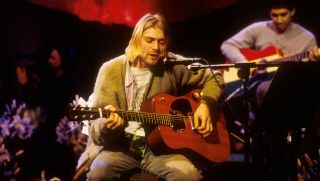 Kurt Cobain's 1959 Martin D-18E – the acoustic guitar he played during Nirvana's legendary set on MTV's Unplugged – is going up for auction.

The D-18E is the seventh of only 302 models built by Martin, and was customized by Cobain, who added a Bartolini pickup to the soundhole.

In addition, the sale of the guitar comes with its original hard shell case decorated by Cobain with a flyer from Poison Idea’s 1990 album Feel the Darkness.

Three baggage claim ticket stubs are attached to the handle, along with an Alaska Airlines sticker affixed to the case.

The Martin is rumored to be the last guitar Cobain played before his death. In 2018 it was reported to no longer be with his family after his daughter, Frances Bean Cobain, left the instrument to her ex-husband, Isaiah Silva, as part of the couple's divorce settlement.

The guitar will be sold at Julien’s Music Icons event, taking place June 19 and 20 in Beverly Hills and online at juliensauctions.com. It can be viewed at the Hard Rock Cafe in London’s Piccadilly Circus May 15-31 and then at Julien’s Auctions Gallery in Beverly Hills from June 15-19.

The starting estimate for Cobain's 1959 Martin D-18E is $1 million - if it sells for that amount, that would put it in the upper echelons of the most expensive guitars ever sold at auction, and the third most expensive acoustic to John Lennon's $2.4m Gibson J-160E and David Gilmour's 1969 Wish You Were Here Martin D-35.

The Martin isn’t the only Cobain guitar up for sale at the auction. Julien’s is also offering a black custom-made and smashed Fender Stratocaster guitar used by the Nirvana front man on the 1994 In Utero tour (estimate: $60,000-$80,000).

Additionally, the Music Icons event is selling other Cobain items, including the metallic silver lame long-sleeve button-down shirt he wore in the Heart-Shaped Box video ($10,000-$20,000), a copy of a Bleach CD signed "Kurdt" and inscribed with drawings by Cobain ($1,000-$2,000), the typed MTV Unplugged in New York set list used by Cobain featuring the songs About a Girl and Where Did You Sleep Last Night ($4,000-$6,000), and more.