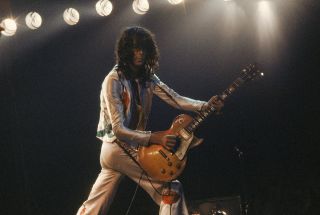 A Led Zeppelin fan helped reunite Jimmy Page with an electric guitar case that was used to transport his “Number One” ‘59 Les Paul Standard in the early '70s.

In a detailed Facebook post, the fan, Jeff Curtis, recounted going to see Led Zeppelin at New York’s Nassau Coliseum in 1972. Following the show, Bonham’s drum tech, Mick Hinton, brought him down to the stage to help load out some of the equipment.

Afterward, he told Curtis, “You can have that,” referencing the guitar case in question.

When Curtis asked, “Where will the guitar go?,” Hinton, he recalls, “took me over and showed me Jimmy Page’s number one Les Paul guitar in its brand new anvil road case. The case I was given was being discarded that night since its back was crushed and no longer afforded protection to the guitar. Talk about being in the right place at the right time!”

Curtis held on to the piece of rock guitar history for decades, but more recently decided he wanted to return it to its rightful owner. After visiting the Play It Loud exhibit at the Metropolitan Museum of Art, which features Number One among its collection, he spoke with the assistant to the exhibit’s curator.

After a series of emails and phone calls, he was told that Page would like to meet with him.

“So, on a beautiful Sunday afternoon in a hotel lounge in New York City, my two daughters, a close friend and I had the pleasure of a 1-hour sit-down and conversation with Jimmy, with him finally getting the guitar case back,” Curtis writes.

“When I opened it up, the look on his face was priceless: ‘What memories this brings back! Thank you so much!’ ”

Curtis goes on to recount, “I gave him copies of both my CDs, which he said he would listen to. He also had brought me a special limited box set edition of Led Zeppelin 2 and signed its book as well as another book I had brought with me.”

“I can honestly say that after the first few minutes, my nervousness completely disappeared and it felt like I was talking with an old friend. Nevertheless, the experience of having had the opportunity to sit down with the very person whose music not only greatly influences my own but also inspired to me to initially pick up and learn to play the guitar almost 50 years ago is something that I will never forget!”