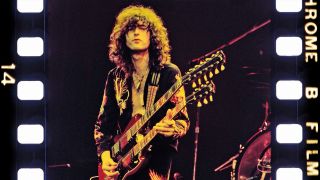 The Led Zeppelin-era live rig of Jimmy Page [shown here wearing his dragon-embroidered jacket and pants in '71] will be part of the Play It Loud exhibit (Image credit: Kate Simon)

There’s mojo to the max at New York’s Metropolitan Museum of Art right now, thanks to a massive exhibition of legendary rock and roll gear called Play It Loud: Instruments of Rock and Roll. The show opened April 8 and will run through to October 1 at the Met. From there it goes on to a six-month run at Cleveland’s Rock and Roll Hall of Fame, which worked with the Met to put the exhibition together.

While the full range of rock instrumentation is represented, the show is especially heavy on iconic guitars such as Jimi Hendrix’s Woodstock Strat, Eric Clapton’s “Blackie” Strat, Jerry Garcia’s “Wolf” and “Tiger” guitars, Keith Richards’ “Micawber” ’54 Telecaster, Bob Dylan’s Newport Strat, John Lennon's 1964 Rickenbacker 325/12 and many others. Jimmy Page and Eddie Van Halen are among those honored with displays of their full live rigs.

“The Met already did a show on rock and roll costumes in the Nineties,” says Jayson Dobney, the museum’s curator of musical instruments. “And there have been museum exhibitions of rock and roll photography, concert posters and even fine art inspired by rock and roll. But this show is about the objects that made rock and roll possible — the instruments that rock musicians used to make it all happen. There’s never been a show in a major museum about this.”

The exhibition was inspired in part by the recent book by former Guitar World editor Brad Tolinski and longtime GW contributor Alan di Perna, Play It Loud: An Epic History of the Sound, Style and Revolution of the Electric Guitar. Di Perna also was drafted to write the lead essay for the Met’s exhibition catalog.

A star-studded opening party was held on April 1 at the Met to launch the exhibition, celebrating the vital role that rock has played in shaping our culture over the last 70 years or so. “This is about the ethos of rock and roll, its individuality and rebel spirit,” Dobney says. “Rock musicians are always searching for new sounds, and they aren’t afraid to use instruments that look and sound different than what anybody else is playing. You don’t get that in other genres. It’s one of the things that makes rock and roll totally unique.”