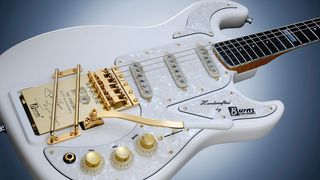 Iconic British guitar company Burns has been revived. The electric guitar brand is being brought back by a group of “leading figures” from the UK MI retail trade industry - heading up the venture are Simon Gilson and Terry Hope, the founders and former owners of PMT, the UK’s largest musical instrument retail chain.

In an interview with MI Trade News, Gilson said, “There is only one true historic guitar brand from England and that's Burns. It was the one that was in right at the beginning and it has all that amazing history and still has tremendous potential.

“Speaking personally, at that time Terry and I were almost through the process of selling PMT and once that was completed we said ‘Well, we've done it with retail, wouldn't it be fantastic to say we also did it with manufacturing?’ The timing is right. There's a cycle in the vintage market and we're only three or four years away from vintage coming back and we'll be ready.”

Founded in 1959 by James Ormston Burns, the Burns company achieved early success due to its instruments being associated with Hank Marvin and the Shadows.

In its heyday in the ‘60s and ‘70s, Burns guitars were seen in the hands of everyone from Jimmy Page to Marc Bolan and Elvis Presley.

The brand went through several iterations over the years, including a period where it was known as Baldwin Burns after being purchased by the US-based Baldwin Piano Company.

In 1992 the Burns London company was relaunched by luthier Barry Gibson, and ever since, Burns guitars been made as exact replicas in his London workshop, supplemented with more mass-market models sourced from Korea and China.

In Burns’ newest incarnation, Gilson stated that it will be at least a year before production starts again, as extensive background work is being undertaken to re-engineer the existing vintage designs so that they meet modern standards of playability while still being genuine Burns guitars.

He also revealed that original and never-before-released Jim Burns designs were acquired in the purchase, and will potentially be explored in future production.

“We've dealt with guitars down the years so we think we have some idea what we’re doing,” Gilson said.

“The new product will come out in 2021, mid-range at first, then with the custom shop models, genuinely made in London by craftsmen, faithful to the brand and things of real beauty.”

Stay tuned for updates, and for more information head to Burns Guitars.