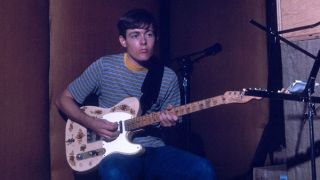 Muscle Shoals Rhythm Section guitarist Pete Carr, who played with everyone from Duane and Gregg Allman and Paul Simon to Rod Stewart and Bob Seger, died on June 20 in Florence, Alabama. He was 70 years old.

As the lead guitarist for the famed studio band, Carr contributed to hits including Simon’s Kodachrome, Stewart’s Tonight’s the Night and Seger’s Mainstreet – that’s him playing the song’s iconic electric guitar lead.

Born in Daytona Beach on April 22, 1950, Jesse Willard “Pete” Carr began playing guitar at 13, inspired by bands like the Beatles, the Rolling Stones and the Ventures, as well as players like James Burton and Chet Atkins.

Two years later, he caught a performance by the Houserockers, an early version of the Allman Joys, in Daytona and introduced himself to Gregg and Duane Allman.

"I was about 15, and I went to see the Allman Joys play at the Club Martinique in Daytona Beach," Carr recalled to Swampland.com. "I had my guitar case with me, and introduced myself when the band took a break and asked Gregg Allman to show me some guitar lines.

“Gregg replied, ‘That's my brother, Duane's, department.’ At that point I introduced myself to Duane Allman. That meeting began a friendship, which lasted until Duane's death in a motorcycle crash on October 29,1971.”

In 1968, Carr and the Allmans began playing together in the group Hour Glass. They produced one album, Power of Love, with Carr primarily on bass guitar, as well as undertook some recordings at the legendary FAME Studios in Muscle Shoals.

After Hour Glass dissolved, Carr opted to focus full-time on studio work, moving to Muscle Shoals and eventually becoming the lead guitarist of the Muscle Shoals Rhythm Section in the early 1970s.

Over the next decade he performed on countless classic rock and pop recordings, including  Simon’s There Goes Rhymin’ Simon and Still Crazy After All These Years, and seven Seger albums, including Stranger in Town, Against the Wind and Like a Rock.

Asked about the biggest thrill of his music career, Carr told Swampland that it’s “really hard to answer,” before going on to praise Simon.

“I always thought Paul Simon was fantastic, in the same league as the Beatles, so when he walked in the studio the first time it was a very awe-inspiring moment for me," he said.

“I remember vividly as he walked through the front door and I saw his face. I had taught myself an acoustic guitar instrumental he did on a Simon and Garfunkel album called Angie when I was a kid. I always thought that he was one of the best, if not the best songwriter ever.”