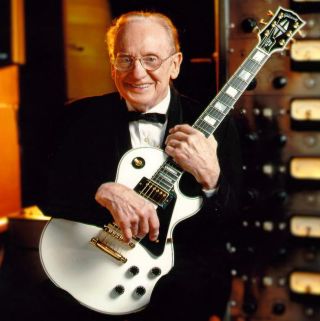 A one-of-a-kind 2002 White Custom 50th Anniversary Les Paul guitar gifted by Gibson to Les Paul to commemorate a half century of their partnership has been put up for sale.

The guitar, crafted by the Gibson Custom Shop, was first presented to Paul in a 2002 ceremony at the Iridium Club in New York City as a “thank you” gift that commemorated 50 years of their collaboration. Paul went on to play and appear with the guitar regularly, including posing with the instrument for the photo that appears on the cover of his autobiography, Les Paul in His Own Words.

Now, Tom Doyle, Paul’s guitar builder and right-hand man for almost 50 years, has put the guitar up for sale on Reverb.com as the centerpiece of the Les Paul Collector’s Package—which, in addition to the 50th Anniversary Gibson Custom Shop White Custom Les Paul, also includes:

- The original guitar case marked up by Paul with his notes

- A photo of Paul signing the guitar's pickguard

- A photo of Paul and Paul McCartney—Signed by Les Paul

Said Doyle, “It is with great pleasure that I now offer this fantastic one-of-a-kind collection. Just imagine all of this amazing historical memorabilia all in one place, in a lovely glass case or a wall hanging lighted shadowbox. There is nothing out there like this collection, and this is a very special and unique opportunity to own a piece of the Les Paul legacy.”

Additionally, 10 percent of the proceeds will be donated to the American Cancer Society.

For full details or to make an offer, head to Reverb.com.