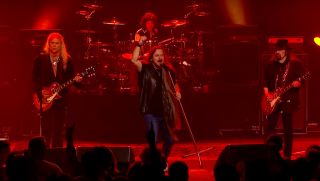 Lynyrd Skynyrd have been out on their Last of the Street Survivors Farewell Tour since the spring of 2018. Now, the iconic southern rock outfit have announced a new leg of what is being billed as their final trek, scheduled to kick off May 10 in Tuscaloosa, Alabama.

The band will be joined by Bad Company, Hank Williams, Jr. and Cody Jinks on select dates. Tickets are on sale February 8 at 10 A.M. local time.

Back when the tour was first announced in 2018, guitarist Gary Rossington, Skynyrd’s only remaining original member, said in a press release: “It’s hard to imagine, after all these years, the band that Ronnie Van Zant, Allen Collins and myself started back in Jacksonville, would resonate for this long and to so many generations of fans. I’m certain they are looking down from above, amazed that the music has touched so many.”

“We’ve been blessed by these great songs and the messages they carry to the fans," added Jonny Van Zant, the band's lead singer. "It’s been a true honor to try and fill in my brother’s footsteps for the past 31 years, keeping the music and his spirit, alive.”

You can check out the full itinerary below.

For more information, head to LynyrdSkynyrd.com.