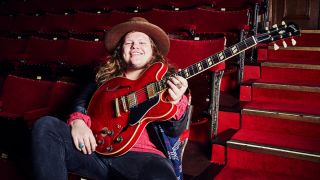 Marcus King is in the midst of his four-night full-production livestream series, Four of a Kind, Live From Nashville, and as part of the event he has now announced a new gear auction with Orange Amplifiers to help raise money for MusiCares.

The auction is divided into three separate “rigs,” with the highest, the High Roller Rig, featuring a Gibson Les Paul Standard '60s with a Bourbon Burst finish signed by King, an Orange TremLord 30 combo amp, a host of Ernie Ball accessories, including a braided instrument cable, Axis capo, picks, a slide and more, and a set of Optiweb Elixir strings.

The Card Shark and High Roller auctions end on July 31, while the Gutshot auction extends until August 3. To place a bid, head to the Marcus King Band.

The final installment of Four of a Kind, Live From Nashville, meanwhile, will be livestreamed August 3 and features the Marcus King Band performing The Last Waltz alongside Jennifer Hartswick Devon Gilfillian and more.

Tickets can also be purchased from the Marcus King Band.