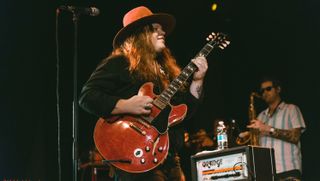 The series will air every Monday at 8:00 PM Tennessee time on July 13 through August 3 and benefit MusiCares.

Said King, “Putting on Four of a Kind is a welcomed challenge for the band and I. After a few months off the road and some time to recuperate, we want to get together and make some music. It is all very new to us, performing with no audience and still trying to bring the same energy as a full live show.

“With some help from some of our closest friends and new ones too, a lovely crew of masked, socially distanced and socially conscious people, we’re excited to have something we can all feel proud of and share with you all!”

Episode two will see King joined by friends Billy Strings and Maggie Rose for an all-night jam, while episode three features Brent Hinds, who will join the Marcus King Trio for a “full-blown rock show.”

All net ticket proceeds will be donated to MusiCares, with tickets priced from $10 to $40 for all four nights.

There’s also a Full House promotion of all four nights and a poster for $50.

Additionally, the Spotify COVID-19 Music Relief project, created to amplify the efforts of organizations that focus on helping those most in need, will match donations alongside other benefits, up to a collective total of $10 million.

To purchase tickets for Four of a Kind, head to Marcus King Band.