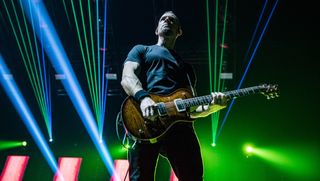 So we’re excited to hear the Alter Bridge guitarist hinting that a new, and bigger, version, the MT 100, is in on the near horizon.

"I've got it sitting in my studio right now - it just came in a couple of days ago and it's an amazing amp,” he told Ultimate Guitar, adding that, “There is no time that I can say that it's going to come out because I don't want to rush it.”

As for what we can expect to hear from the MT 100 when it finally is released, Tremonti continued, “The MT 15 had this great high gain channel and a great clean channel with a boost on it, but this MT 100 is going to have, obviously, a ton of headroom, but it's also going to have a very Dumble-esque boost on the amp.

"That's what I've really been digging on right now. It's just an amazing tone. When I collect amps at home, I have a few Dumbles and other amps like that, I got so addicted to that tone and I want my amp to have a great version of it. That's what we're dialing in at the moment."

Drilling down into the specifics, Tremonti went on to state that he “went and searched through all my favorite clips of tones – because I could sit and listen to clips of people playing Dumbles all day long and be happy.

"So I went through and found my favorite clips, not just Dumbles, but all my favorites, and I sent them over to Doug Sewell at PRS to see if we can get close to some of those and make our own version of it.

"So it's kind of a combination of all my favorite tones on this one channel. I just sent over the third or fourth attempt at that overdrive sound and we were getting in the ballpark, for sure. It's going to be awesome.

"It will definitely be the only amp that has that brutal high gain channel, a crystal clear Fender Twin channel with tons of headroom that I love, and then also that more rock 'n' roll, blues, Dumble style – where if you want to do that half-dirty verse sort of thing, that's a perfect option."

Tremonti summed up his goal with the upcoming MT 100 by stating, "I just want to have an amp that has everything that I love about amplifiers. It's almost impossible to do, to get everything you want out of it. But we're trying to get as close as we can."