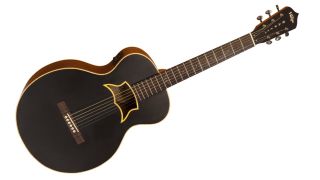 UK-based Vintage Guitars is known for its unusual, and sometimes bizarre, builds – for just one example, recall the Joe Doe Punkaster, a Strat/Tele electric guitar mashup that came complete with its own fictional backstory.

But the company may have even topped itself with the Raven, designed by English guitarist Paul Brett, who has played with the Strawbs, the Crazy World of Arthur Brown, Roy Harper and others.

The rather striking acoustic-electric – feast your eyes on the batwing-shaped sound hole, for starters – is part of the Paul Brett Signature Series and, according to the company, “expresses and highlights this English classic rock player’s love and immense knowledge for early acoustic guitars,” as well as, we’d imagine, a particular Edgar Allen Poe poem.

The entire package comes finished in satin black and a design that, assures Vintage, “evokes Gothic from all angles.”