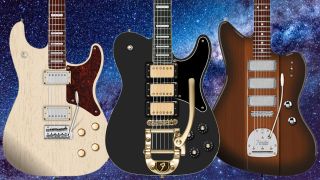 NAMM 2020: If there’s one thing Fender are good at, it’s honoring the great traditions of old and celebrating their place in the great history of guitar making. But as with some models on the recently announced Custom Shop line-up, this year’s revamped Parallel Universe series proves the American manufacturers can still think ahead and move with the times.

The eight new models are aimed at players who are looking for more than just an average Strat or Tele - incorporating more customized and unusual combinations of body shapes, parts and elements. Here’s a closer look at what Fender have been up to.

There’s something extra special about black guitars with gold hardware - perfectly demonstrated by this all-new Troublemaker Tele Deluxe Bigsby, with the added bonus of pearloid block inlays and white binding throughout for a classy tuxedo look.

Its custom-calibrated, Tim Shaw-designed Double Tap Humbuckers will ensure all bases are covered with effortless ease and are able to switch from an aggressive humbucker mode to split single-coil sounds with no drop in volume.

Featuring an Adjusto-Matic Bigsby vibrato tailpiece fitted onto a mahogany body and neck, with an ebony fingerboard, this is the kind of weapon that could get you out of all sorts of trouble in any kind of musical situation.

The Troublemaker Tele Deluxe - which comes without the Bigsby vibrato - is equally as striking, thanks to its Olympic White lacquer finish and gold hardware. It also features a solid mahogany body - ideal for punch and sustain - with a 12” radius neck with ebony fingerboard and 22 medium-jumbo frets, plus the custom Double Tap humbuckers for full tonal flexibility without compromise.

The push-push volume controls activate the pickups, which use a special alnico 4 magnet to offer full articulation across the dynamic range.

This mouth-watering Jazzmaster-body, Strat-neck creation could easily end up being the new best-seller of the series. A Frankenstein that’s far easier on the eye than such a title would suggest, it boasts a figured maple top finished in Transparent Faded Seafoam Green and comes fitted with the Stevie Ray Vaughan-inspired Texas Special pickups, a 2-point American Pro Strat bridge and 22 narrow tall frets on a 9.5” radius, one-piece rosewood neck.

It’s these clever boutique-style appointments coupled with Fender’s long-standing knack for versatility that make it a true gem in this year’s NAMM show line-up.

One of the lesser-known models from Fender history, the short-lived Custom (also known as the Maverick) makes a comeback this year. It was originally launched in 1969 as an attempt to repackage and sell off unused factory stock, basically meaning the six-strings were built from leftovers from the Electric XII range and Fender Mustangs.

There’s nothing scrap heap about the new alder-bodied Maverick Dorado, however, thanks to its Tim Shaw-designed Filter’Tron humbuckers, Adjusto-Matic with Bigsby B50 Vibrato Tailpiece, 60s C-shaped neck and ebony fingerboard. It also boast more finishes than any of the other Parallel Universe IIs being unveiled at NAMM, available in Ultrabust, Mystic Pine Green and Firemist Gold. A very welcome surprise from the Fender camp indeed.

This brand-new Spark-O-Matic Jazzmaster was definitely a bright idea. Aimed at players looking for a bit more bite out of their instrument, its custom 3-piece body features a mahogany core and chambered ash wings for uncompromising resonance, all captured in full tonal glory by its triple set of chrome-covered Seymour Duncan SM-1N and SM-3B mini-humbuckers.

It also includes an American Professional Jazzmaster bridge, a deep C-shaped solid maple neck and 9.5” rosewood fingerboard. Finished in 3-color sunburst and coming in a deluxe hardshell case - like all of the Parallel Universe II instruments - its a guitar that’s bound to set you apart from the crowd.

Its looks might not be for everyone, but fans of more retro designs will be pleased to see the inclusion of this Jazz Strat in Fender’s 2020 catalogue. Available in a Mystic Surf Green lacquer, it harks back to an era where guitars were trying to look more futuristic - which now, of course, is exactly what’s at the forefront of their seductive, vintage appeal.

This particular model reimagines the Stratocaster with the neck, vibrato and pickups of a Jazzmaster, plus a custom Decoboom Streamline Pinstriped pickguard and aluminum radio knobs. Its alder body and rosewood fingerboard are voiced by Pure Vintage ’65 single-coils, which will transport back through some incredibly classic tones.

The Tele Mágico is definitely one of the most customized Telecasters Fender have ever conceived. Available in Transparent Daphne Blue or Transparent Surf Green gloss finishes - both of which incorporate elements of pearl, nickel and gold across a Thinline swamp ash body and flame maple neck - it screams boutique in every sense of the word.

Designed with Custom Shop Master Builder Ron Thorn, who might know a thing or two about building perfect instruments, it offers 21 medium-jumbo frets, two custom-designed Fender Gold Foil pickups, a Cabronita pickguard a cut 3-saddle Tele bridge. A truly magical looking and sounding instrument to live up to the name.

Though it seem as if it’s one of the more understated options in this year’s revamped line, the static white-finished Uptown Strat certainly does offer a lot for the money. To start with, you get a Fijian mahogany body - more associated with Les Paul-type guitars - and a pair of chrome Double Tap humbucking pickups, well suited to those who want to cover as much tonal ground as possible.

Along with that, you’ll find a 9.5” radius mahogany neck, a 2-point Synchronized Tremolo System and individual volume and tone controls for each pickup. If you’ve been looking for a Strat with a unique finish and plenty of bark, this could very well be the guitar for you…