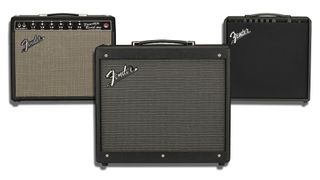 NAMM 2020: There’s been a lot of news on the guitar front from Fender this weekend, but the American company has also unveiled some very interesting developments in its amp range, including some modern-style digital options as well as an all-tube/hand-wired ‘64 Custom Princeton Reverb reissue that’s bound to excite the collectors out there. Here’s a closer look at what we learned at the show...

Hand-wired in the Corona factory, this ‘64 Custom Princeton Reverb reissue is sure to turn heads. A faithful recreation of the highly collectable 1960s models, it promises to deliver the quintessential Fender tonal response thanks to its hand-wired AA1164 circuit with tube-driven spring reverb and tremolo.

It pays tribute to Fender’s Blackface glory years in amplifier production (1963–1967), when their designs were renowned for their unbeatable touch-sensitivity and dynamic range, offering a crystal transparency that could bring out the unique nuances in every player.

Other features include Fender Vintage Blue tone capacitors, three 12AX7 preamp tubes, as well as one 12AT7, plus a 5AR4/GZ34 rectifier tube and a matched pair of 6V6 power tubes - altogether delivering 12 watts output power through a 10” Jensen® alnico P10-R speaker, housed in a solid pine cabinet.

If you’re on the hunt for one of the most highly sought-after Fender tones, vintage aesthetics and unrivaled portability, this could very well be the amp for you.

Perfect for both practice and performance, the new Mustang LT50 packs 500 watts of power, a high quality 12-inch speaker housed in a wooden cabinet, a full-color display and a collection of presets into one compact and affordable package.

There are plenty of amp models and on-board effects to keep you busy, though it’s all presented in an incredibly user-friendly interface that follows the same logic as some of the more simplistic valve amps it recreates. And there’s a stereo headphone output for silent practice - a handy option for those who want to keep creating into the night.

The Mustang GTX models offer even more tones and versatility - with a single 12” Celestion G12P80200 speaker, onboard presets and a modular signal path flexibility which allows you to move effects anywhere in the chain. It also boasts stereo XLR line outputs and stereo effects loop let you interface with external gear in the stage or in the studio.

The optional seven-button footswitch harnesses all that ingenuity for live performances and also unlocks the built-in 60-second looper. Available in either 50-Watts or 100-Watts, it’s the kind of digital amp that will cover everything you need with relative ease.