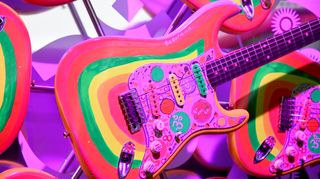 NAMM 2020: As well as its jaw-dropping array of 2020 Custom Shop models, Fender has announced a faithful recreation of George Harrison’s ‘Rocky’ Stratocaster, as made famous by its appearance in The Beatles’ 1967 Magical Mystery Tour film.

Harrison’s guitar was originally a Sonic Blue Strat, purchased in 1965 and still bearing the decal from the music store it came from: ‘Grimwoods; The music people; Maidstone and Whitstable’.

In 1967, Harrison gave the guitar its dayglo paint job, and by December 1969, he had painted ‘Bebopalula’ on the body, ‘Go Cat Go’ on the pickguard’ and ‘Rocky’ on the headstock.

In creating this new model, Fender Custom Shop Master Builder Paul Waller examined and measured the original guitar - which boasted a rare asymmetrical C-profile neck - and its pickups to create a meticulous replica, right down to the ‘Grimwoods’ decal.

The guitar’s price is yet to be confirmed, as is its availability, but we do know it’s due in April. Until then, enjoy this hypnotic display from Fender’s NAMM 2020 booth. Far out, man...