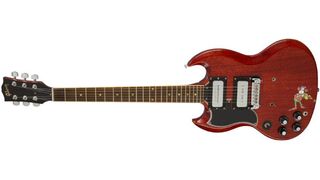 NAMM 2020: Those who take their Sabbath black just like their coffee will be tolling the bell of doom in celebration with the news that Gibson has launched an Artist Series replica of Tony Iommi's iconic 1964 SG Special.

Nicknamed "Monkey", and featuring a sticker depicting the eponymous primate just below the bridge, the Monkey SG Special is the Holy Grail of electric guitars in Black Sabbath history. Here the heavily modded doublecut has been recreated in forensic detail.

Besides its mahogany body, mahogany set neck build, the Monkey features a pair of hand-made pickups, which were wound by an apprentice of the late pickup guru John Birch. It has been aged, has a zero fret as per Iommi's original, and also the same stop tailpiece bushings and routing holes where the original tune-matic bridge and tailpiece would have been removed.

“I was amazed when I saw it," said Iommi. "I went, ‘My god!’ It just shocked me. … This new model is exactly, exactly the same as the original, right down to every little mark and dent. It's just incredible.”

“Tony Iommi's iconic riffs, heavy tones and massively-influential albums created the blueprint for Heavy Metal and many other genres to follow,” said Cesar Gueikian, Gibson's chief merchant officer. “Having the opportunity to work with Tony to recreate his original 1964 SG is the ultimate honor for all of us at Gibson.”

The Gibson Custom Shop has created 50 of these guitars, with 25 right-handed and 25 left-handed like the original. Each comes signed and numbered by Tony Iommi, and inside the custom 1960s coffin case you'll find an exclusive replica of Iommi's silver cross necklace and leather touring guitar strap.

No price has been released just yet, but you might just have to sell your soul for rock 'n' roll to afford one.