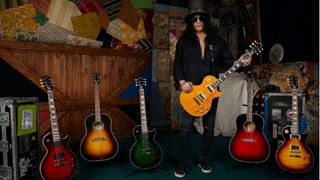 NAMM 2020: Gibson has rolled out the big guns with the Slash Collection – with four Les Pauls and two J-45 Standard acoustics co-developed with top-hatted global brand ambassador and rock icon.

The Les Pauls each feature a AAA flame maple top and mahogany body, with a custom C-shape neck profile,  SlashBucker pickups, and Slash's "Scully" drawing on the back of the headstock among the signature flourishes. Of course, just the sight of the hot orange-yellow of the Appetite Burst is enough to give anyone weaned on Nightrain a Proustian moment of dizzying nostalgia – there's no question whose hand is behind these guitars.

Under the hood you've got orange drop capacitors and hand-wired electronics. There's color-coordinated hardware, and there is a signature truss rod cover and a blank in the case if you feel there's already enough Slash. Each comes strung with Slash signature Ernie Balls and with four Slash Dunlop Tortex picks in the case.

The J-45s feature a custom Slash-approved C-neck profile and a "fatter and more modern" 16" fretboard radius (the 2019 Standards have a 12" fretboard radius). There's no wood spec revealed by Gibson just yet but it looks very much like the regular run of J-45s with a solid Sitka spruce top, solid mahogany on the back and sides.

As with the Les Pauls, the J-45s have signature or blank truss rod covers, Slash "Scully" sketch on the back of the headstock – and, yes, they come with the picks, too.

In a statement, Slash said that the guitars "truly reflect" the gear he uses live and in the studio. “The quality and attention to detail is next level," he said. "I think guitarists will be inspired by what we've put together.”

Prices and so forth are TBC, but these are not Custom Shop instruments so we would imagine they would be priced in line with Gibson's Standard line. Not cheap. But not sell-the-house, drain-the-college-fund expensive.

Check out our NAMM 2020 hub for the hottest gear news.