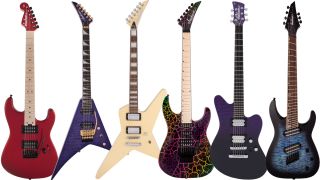 NAMM 2020: This year there has definitely been an attitude of go big or go home from the guitar world's leading manufacturers, but perhaps Jackson has taken that to the next level with dozens of new electric guitars for 2020.

Is this the largest product launch? Maybe. Is it the fastest? With every guitar in this lineup built for speed and performance, quite possibly, and here Jackson has something new at all price points.

There are three stunning USA Series models, with Volbeat's Rob Caggiano making his Jackson debut with the Shadowcaster, and a Gus G San Dimas and Star in Ivory.

The Pro and X Series have been comprehensively revised, with Pro Series Caggiano and Gus G models joining signature models for Revocation's David Davidson, Arch Enemy's Jeff Loomis, Trivium's Corey Beaulieu, and Lamb of God's Mark Morton. There are some real eye-catching new Soloists, too, and a sandblasted ash finish on the Dinky Arch Top models that offers something new.

The X Series debuts a host of new finishes, too, with the ever-popular SL4X Soloist now available in Butterscotch, Pacific Ocean and Gloss Black, while the affordable JS Series adds some quilt maple class with two new Dinky Arch Tops.

There are bold shapes, even bolder shapes, and interesting and smart spec choices throughout. Let's take a closer look...

The three top-line USA-built models Jackson has announced for NAMM 2020 are all signature models and comprise Rob Caggiano's  Shadowcaster and Gus G's Star and San Dimas.

The Shadowcaster takes the short-lived Jackson Outcaster body shape and runs with it. It has an alder body with a stunning 1/8" quilt maple top, finished in Trans Purple Fade because Caggiano has always played purple since the mid '90s when ESP sent him a stock Horizon in that color.

The bolt-on neck is quartersawn maple, reinforced with graphite and a scarf joint. Caggiano has gone for an ebony fretboard, with 24 jumbo frets and a 12"-16" compound radius. Luminlay fret markers run down the side of the neck, while a set of locking Sperzel die-cast tuners and a Tone Pros tune-o-matic should keep things solid on the hardware front.

The Shadowcaster has a signature DiMarzio humbucker in the bridge and a DiMarzio Air Norton in the neck. A five-position blade switch, volume and tone controls should get you a wide range of tones.

Gus G's Star features a solid alder body, a neck-through-body maple neck, a compound 12"-16" pau ferro fingerboard with block inlay, a set of Gus G's active Proteus humbuckers in neck and bridge, a TonePros tune-o-matic bridge with Gotoh anchored tailpiece and Jackson die-cast locking tuners. There are speed grips on the volume control, a three-way pickup selector, and all in all this looks like a fuss-free speed and tone machine. If the Star body shape is a bit much, the Ivory finish dials it down a notch.

Where there is no dialling down is the San Dimas in Candy Apple Red. This S-style is 100 per cent hotrod. It has an alder body, a neck-through-body quartersawn maple neck – reinforced with graphite and a scarf joint – a maple 12"-16" compound radius fretboard with 24 jumbo frets and a heel-mounted truss wheel for easy adjustments to neck relief.

Pickups-wise, you've got a set of Gus G's Titans in the neck and bridge – they're passive, have heaps of mids and mid-highs – and three-way blade switch and volume knob. A Gotoh Custom tremolo is a nice touch here. You don't always need the hassle of a double-locking Floyd to unlock some whammy bar magic, and with a set of locking Sperzel tuners, we would fully expect this premium shred machine to hold its tuning under all kinds of abuse.

If the first sight of Rob Caggiano's signature Shadowcaster immediately called to mind Mark Morton's Dominion, with both sharing a very atypically Jackson aversion to sharp edges, seeing them side by side they are quite clearly different shapes. Caggiano's Shadowcaster has a more extended bass-side horn and a treble-side cutaway that's almost Venetian in its profile.

Gus G's Star and San Dimas models see us on more familiar ground for Jackson. The San Dimas is the archetypal supercharged S-Style, and features a mahogany body, maple neck-through-body construction, and a set of Gus G Titan humbuckers, which have an alnico V magnet and are voiced for midrange cut and – as you might imagine – ripping solos. The Candy Apple Red finish and reverse Strat headstock is pretty darn cool.

The Star, meanwhile, features a set of active Gus G signature Proteus humbuckers, which like the Titans were developed by the G man himself. The specs say they offer noise-free performance (the active preamp at work) with roomy picking dynamics.

Corey Beaulieu's two King Vs are a metal player's guitar and feature his signature contouring and the stunning Winterstorm quilted-maple top finish. They have a mahogany body, maple neck-through-body construction, 24 jumbo frets on a compound 12"-16" radius ebony fretboard, and there's a Floyd Rose 1000 Series double-locking vibrato for whammy bar pyrotechnics. A set of active Seymour Duncan Blackout humbuckers provide the thunder. Available in six or seven-strings.

Jeff Loomis's Kelly might look understated in Black, with its black hardware and ebony fretboard keeping things on-message and totally noir. But with his signature active Seymour Duncan Blackout humbuckers and its Floyd Rose 1500 double-locking tremolo it'll flatter the flamboyant shredder. The body is basswood with a sandblasted ash top. There are Luminlay glow-in-the-dark side markers. Like all in the Jackson catalogue, it's built for speed.

The most aggressively designed Pro Series signature model is a Warrior appropriately built for David Davidson of Revocation. A mahogany seven-string, finished in walnut stain, it is equipped with Davidson's signature DiMarzio Imperium humbuckers in the bridge and neck, with a push/pull coil split for singlecoil tones, and a Floyd Rose 1000 Series double-locking tremolo.

The 2020 Pro Series gets a cornucopia of new finish and tonewood options, with pro-quality pickups from Seymour Duncan and Fishman.

One of the most striking in this year's Pro Series, the Dinky Modern Ash debuts an open-grain sandblasted finish – not unlike those released by PRS for its SE line back in September – and has a bolt-on three-piece maple/wenge neck that's reinforced with graphite and a compound 12"-16" ebony fretboard. A set of Fishman Fluence Open Core PRF-COC humbuckers with some smart push-pull features to toggle the voicings, Gotoh locking tuners,  a Hipshot hardtail bridge, and Luminlay glow-in-the-dark side-markers complete what should be an electric with a real premium feel.

Elsewhere, there are some stunning Soloists. Whether it's Jackson's flagship S-Style rendered in Crackle finishes, with basswood bodies complemented by through-neck construction, Seymour Duncan Distortion humbuckers and Floyd Rose 1000 Series double-locking tremolo units, or whether it's the classy mahogany body, with a choice of either flame or quilted maple tops, this year's Soloists are state-of-the-art shred machines.

The 2020 Pro Series Dinky models are no bad either. Options include alder or alder and poplar-topped bodies, with Seymour Duncan humbuckers, Floyd Rose 1000 Series double-locking tremolo units and some retina-bothering retro finishes such as Magenta and Slime Green. Heel-mounted truss adjustment wheels should take some pain out of setups too.

And no Pro Series would be complete without something spiky, which is where the Rhoads RR24Q, with its quilted maple finishes, and the King V Two-Face come in. Both come with Floyd Rose 1000 Series double-locking tremolo systems, sharkfin inlay, neck-through-body constructions and Seymour Duncan Distortion TB-6/SH-6N humbuckers in the neck and bridge. The reverse headstock on the Rhoads dials up the aggression on what was already a pretty darn aggro body shape.

Mark Morton's Dominion features a few appointments seen elsewhere in the X Series. There's the maple neck-through-body construction, the laurel fretboard with a compound 12"-16" radius. But it ups the ante with the pickups and bodywood.

Here, you've got a mahogany body, or mahogany body with flame maple veneer, with each guitar equipped with a pair of Mark Morton signature DiMarzio Dominion humbuckers that pack a mid-range wallop that could give you a nosebleed.

Jackson's mid-priced range, and thus operating in the most hotly-contested market, the X Series is a serious option for those looking for a super-playable and high-spec'd electric for the price. The 2020 models typically feature poplar bodies, though both Swirl and Crackle Soloists have basswood.

Elsewhere, you've got through-body maple necks, with 12"-16" compound radius laurel or maple fingerboards, and jumbo frets for an easy ride.

Pickup options vary. The SLX DX Soloist, Warrior, and Kelly all feature high-output Jackson humbuckers, with the King V equipped with a set of active EMG 81/85 humbuckers in the bridge and neck. The SL4X DX Soloist, with its handsome pickguard and finishes, has three stacked HR-101 Hot Rails 'buckers in bridge, middle and neck positions.

The two extended-range Soloists in this year's X Series are both multi-scale designs, with fanned frets and staggered individual saddles for improved intonation and feel. Both seven- and eight-string models feature Jackson's uncovered blade humbuckers and should have enough chug on tap to cause structural damage whenever you lean into a monster riff.

The most-affordable of Jackson's 2020 Gus G signature models downsizes the spec but sure looks the part. Just look at that shape. Gus G's signature graces the truss rod cover. Finished in Ivory White, with an amaranth fretboard and sharkfin inlay, it has a poplar body with a bolt-on maple neck. The compound 12"-16" fretboard radius should promise a comfortable ride while a pair of high-output Jackson humbuckers provide the firepower.

There's a three-way pickup selector and a volume control. No tone. Hey, it's always on ten, right?

This year sees the JS Dinky Arch Top released in Transparent Green Burst and Transparent Purple Burst. Otherwise, both guitars are identical, featuring a poplar body with quilt maple veneer, a bolt-on maple neck with graphite reinforcement, high-output Jackson humbuckers and a Floyd Rose-licensed locking tremolo. The pearloid sharkfin inlays, the compound fretboard radius... Yep, the JS Series is all about giving you that Jackson look and feel and plenty change from 500 bucks.

For the latest gear news from Anaheim, CA, head to our NAMM 2020 hub.