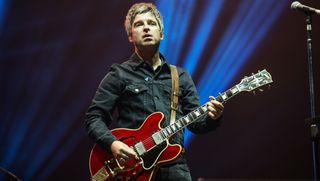 Noel Gallagher keeps rather busy releasing new music with his band, the High Flying Birds, and, on occasion, shooting down continual asks about an Oasis reunion.

But in a recent interview with Zane Lowe on Beats 1, the electric guitar player and frontman did acknowledge that there’s one other musical endeavor he’d make time for, should the planets align – being part of a reunion of legendary Manchester band the Smiths, headed by singer Morrissey and guitarist Johnny Marr.

“I would love, and it’s never gonna happen, it’s a thing in a parallel universe, if the Smiths got back together," he said. "I’m [one time Smiths guitarist and bassist] Craig Gannon and I’d go to Johnny [Marr] and say don’t get another guitarist mate – I’m your man.”

Marr, for his part, has dismissed suggestions of a Smiths reunion. But Gallagher also hinted he’d be okay with filling the guitar role in another band.

“I would love to be in a band and just be a guitarist for a while,” Gallagher said, adding about Oasis, “not that band.”